Home » If It Bleeds: Four novellas 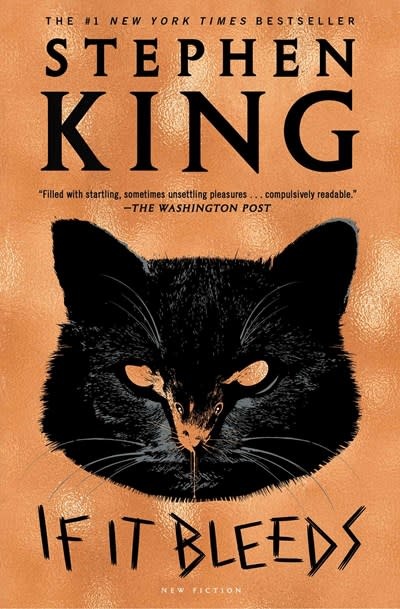 If It Bleeds: Four novellas

From the legendary storyteller and master of short fiction Stephen King comes an extraordinary collection of four new “exceptionally compelling novellas that reaffirm [King’s] mastery of the form” (The Washington Post).

Four brilliant new tales in If It Bleeds are sure to prove as iconic as their predecessors. Once again, King’s remarkable range is on full display. In the title story, reader favorite Holly Gibney (from the Mr. Mercedes trilogy and The Outsider) must face her fears, and possibly another outsider—this time on her own. In “Mr. Harrigan’s Phone” an intergenerational friendship has a disturbing afterlife. “The Life of Chuck” explores, beautifully, how each of us contains multitudes. And in “Rat,” a struggling writer must contend with the darker side of ambition.

If these novellas show King’s range, they also prove that certain themes endure. One of King’s great concerns is evil, and in If It Bleeds, there’s plenty of it. There is also evil’s opposite, which in King’s fiction often manifests as friendship. Holly is reminded that friendship is not only life-affirming but can be life-saving. Young Craig befriends Mr. Harrigan, and the sweetness of this late-in-life connection is its own reward.

“Exactly what I wanted to read right now,” said Ruth Franklin in a rave on the cover of The New York Times Book Review. “Phenomenal," said Brian Truitt in USA TODAY. “King still owns the fright business like none other.”

Stephen King is the author of more than sixty books, all of them worldwide bestsellers. His recent work includes If It Bleeds, The Institute, Elevation, The Outsider, Sleeping Beauties (cowritten with his son Owen King), and the Bill Hodges trilogy: End of Watch, Finders Keepers, and Mr. Mercedes (an Edgar Award winner for Best Novel and an AT&T Audience Network original television series). His novel 11/22/63 was named a top ten book of 2011 by The New York Times Book Review and won the Los Angeles Times Book Prize for Mystery/Thriller. His epic works The Dark Tower, It, Pet Sematary, and Doctor Sleep are the basis for major motion pictures, with It now the highest-grossing horror film of all time. He is the recipient of the 2020 Audio Publishers Association Lifetime Achievement Award, the 2018 PEN America Literary Service Award, the 2014 National Medal of Arts, and the 2003 National Book Foundation Medal for Distinguished Contribution to American Letters. He lives in Bangor, Maine, with his wife, novelist Tabitha King.