Home » If This Gets Out 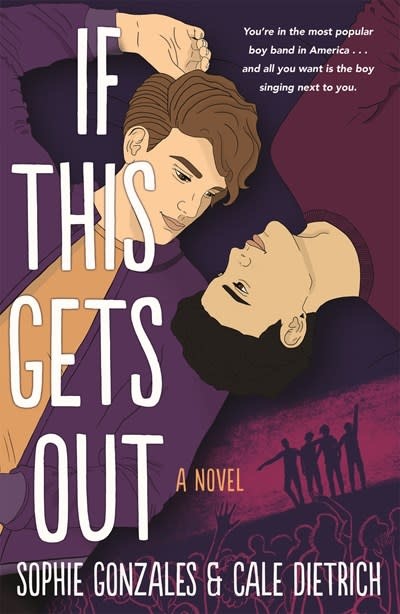 If This Gets Out

For fans of What If It's Us: two boys in America's biggest boy band fall for each other while on their first sold-out European tour, and are forced to keep their relationship a secret

You're in the most popular boy band in America…and all you want is the boy singing next to you.

“An absolute showstopper! Equal parts edgy and adorable, this bright, joyful book has everything I look for in a queer YA romance.” —Phil Stamper, bestselling author of The Gravity of Us

Eighteen-year-olds Ruben Montez and Zach Knight are two members of the boy-band Saturday, one of the biggest acts in America. Along with their bandmates, Angel Phan and Jon Braxton, the four are teen heartthrobs in front of the cameras and best friends backstage.

But privately, the pressure to stay in the closet has Ruben confiding in Zach.

On a whirlwind tour through Europe with an unrelenting schedule and minimal supervision, as the two come to rely on each other more and more, their already close friendship evolves into a romance. But when they decide they’re ready to tell their fans and live freely, Zach and Ruben realize they will never truly have the support they need.

How can they hold tight to each other when their whole world is coming apart?

SOPHIE GONZALES lives in Adelaide, Australia. When she isn’t writing, she can be found ice skating, performing in musical theatre, and practicing the piano. She is the author of The Law of Inertia, Only Mostly Devastated, and Perfect on Paper.

CALE DIETRICH is a YA devotee, lifelong gamer, and tragic pop punk enthusiast. He lives in Brisbane, Australia. His debut novel, The Love Interest, was named a 2018 Rainbow List Selection. He is also the author of The Friend Scheme.