Home » Ikigai for Teens: Finding Your Reason for Being 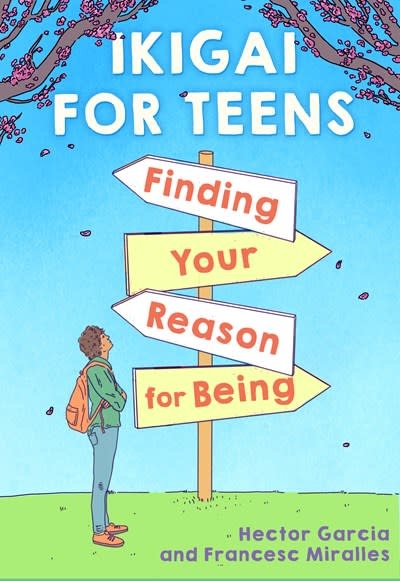 Ikigai for Teens: Finding Your Reason for Being

A bestselling motivational book based on the Japanese concept of finding happiness in everyday life, now for young readers!

The Japanese people say everybody has an "Ikigai," or a reason to live. Some people have found their Ikigai and are aware of it. Other people have it inside, but have not found it yet. This concept, Ikigai, is one of the secrets for a long, active, and happy life.Héctor García and Francesc Miralles visited Ogimi, a town on the north of Okinawa in Japan that has the highest longevity in the world. They spent weeks living with the residents of Ogimi and interviewing dozens of the villagers. These people all had lived to be more than a hundred years old, and they were all in great physical (and spiritual) shape. After their trip, Héctor and Francesc wrote a book examining the centennials' keys to an optimistic and vital existence. What do the oldest people in the world eat, what do they work on, how do they connect with others, and-the best-kept secret-how do they find their Ikigai? Ikigai is what gives them satisfaction and happiness, and brings real meaning to their lives.The result was Ikigai: The Japanese Secret to a Long and Happy Life, an international bestseller which has been translated into over 49 languages.With the book, García and Miralles made it their mission to help its readers find their own Ikigai and discover many keys of Japanese philosophy to a healthy body, mind, and spirit.They have now adapted their bestselling book for young readers. Young adults can find their Ikigai too!

Héctor García was born in Valencia in 1981. He moved to Tokyo in 2004, and has been living there ever since. His wife's family is from Okinawa, Japan, and Héctor speaks the dialect of Ogimi. His website kirainet.com, with over a million monthly views, is a world reference in Japanese popular culture. He is the author of the book A Geek in Japan, which has sold more than 100,000 copies and has been translated to more than ten languages.

Francesc Miralles was born in Barcelona in 1968. He studied German Language and Literature and he works as a journalist specializing in psychology and spirituality. Besides working for media outlets such as El País and Radio Nacional de España, he has written numerous fiction and non-fiction books with a large international impact. He has also written many books for young readers. His latest success, Ikigai, has been translated into 49 languages.