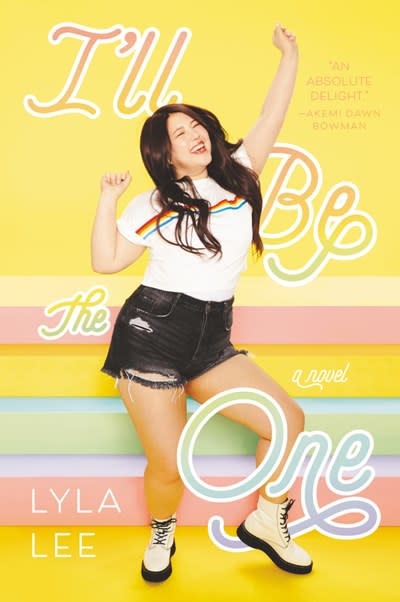 I’ll Be the One

A deliciously fun and thoughtful rom-com, I'll Be the One follows a plus-sized teenage girl who shatters expectations on a televised competition seeking the next big K-pop star. Lyla Lee’s debut YA novel is a nuanced celebration of body positivity, first love, and a talented young woman claiming her space—a perfect book for fans of Jenny Han and Julie Murphy. Now in paperback!

Skye Shin has heard it all. Fat girls can’t dance. Shouldn’t wear bright colors. Shouldn’t call attention to themselves.But Skye dreams of joining the glittering, intense world of K-pop, and, to do that, she’s about to break all the rules that society, the media, and even her own mother have set for girls like her. She’ll challenge thousands of other performers in an internationally televised competition looking for the next K-pop star, and she’ll do it better than anyone else. When Skye nails her audition, she’s immediately swept into a whirlwind of countless practices, shocking performances, and the drama that comes with reality TV. What she doesn’t count on are the highly fat-phobic beauty standards of the Korean pop entertainment industry, or her sudden media fame and scrutiny.Luckily, she doesn’t have to go it alone. In the competition, Skye meets new friends and finds herself partnered with fellow competitor Henry Cho, an unfairly cute celebrity model. Sparks soon fly, and with the support of her friends and Henry, Skye sets her sights on becoming the world’s first plus-size K-pop star—by winning the competition without losing herself.