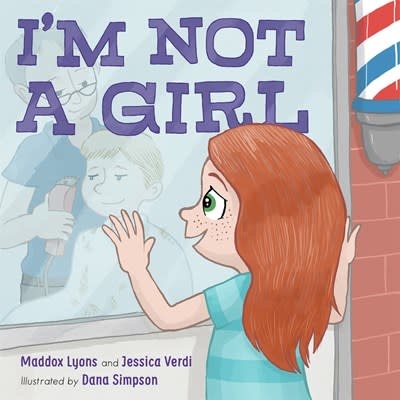 I'm Not a Girl

Nobody seems to understand that Hannah is not a girl.

His parents ask why he won't wear all the clothes they pick out. His friend thinks he must be a tomboy. His teacher insists he should be proud to be a girl.

But a birthday wish, a new word, and a stroke of courage might be just what Hannah needs to finally show the world who he really is.

Written by Maddox Lyons and Jessica Verdi with expressive art by New York Times–bestselling illustrator Dana Simpson, I'm Not a Girl is an empowering story about a boy who is determined to be himself.

Maddox Lyons is a twelve-year-old transgender boy who lives in California with his parents, sister, two dogs, and two pet rats. He does advocacy and outreach with LGBTQ+ organizations and can be reached at maddoxlyons.com.

Jessica Verdi is the author of several books for children and young adults. She lives in New York with her family, and loves traveling, hot sauce, theater, flip-flops, and all animals. jessicaverdi.com

Dana Claire Simpson, from Gig Harbor, Washington, is the creator of several comics, including the New York Times–bestselling Phoebe and Her Unicorn series. She lives with her husband and her cat in Santa Barbara, California. danasimpson.com