Home » Immigrant Innovators: 30 Entrepreneurs Who Made a Difference 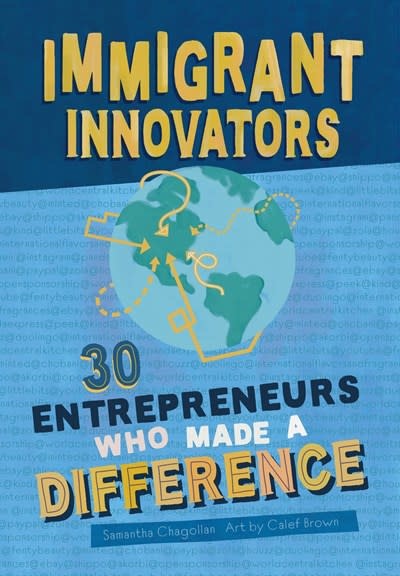 Immigrant Innovators: 30 Entrepreneurs Who Made a Difference

An inspiring children’s biography collection, Immigrant Innovators: 30 Entrepreneurs Who Made a Difference highlights the stories of 30 immigrant entrepreneurs who have made it big in America, in fields ranging from technology to books to food.

An inspiring children’s biography collection, Immigrant Innovators highlights the stories of 30 immigrant entrepreneurs who have made it big in America.

Geared toward readers ages 8–12, the book features people from around the world who played a major role in establishing global companies and products. These entrepreneurs come from more than 25 countries and have been successful in a wide range of fields, from energy bars (KIND), yogurt (Chobani), and restaurant chains (Panda Express), to dominant industry players like YouTube and Tesla. The book includes full-page illustrated portraits of each entrepreneur as well as colorful infographics throughout.

Immigrant Innovators is a celebration of the immigrant experience—both the triumphs and the challenges—and an important reminder of the strength that comes from a broad and diverse population.

Samantha Chagollan is an award-winning author and editor of a variety of children's fiction and nonfiction books. A native of Southern California, Samantha grew up in Orange County. She earned a bachelor's degree in literature from Humboldt State University in Arcata, California, where she focused her studies on multicultural literature and the Spanish language. Through these studies, she took a deeper dive into the heritage of her paternal grandparents and found a deep admiration for the determination and dedication it took for them to immigrate to the United States from Mexico in the 1920s. Without their sacrifices, she recognizes with appreciation that none of the successes of their children, grandchildren, and great grandchildren would have been possible. Samantha lives in Costa Mesa, California, with her husband, Matt, and when she's not writing, she enjoys spending time with her dogs, painting, and teaching yoga.Calef Brown is the author and illustrator of thirteen books for children, including Polkabats and Octopus Slacks: 14 Stories; Flamingos on the Roof: Poems and Paintings-a New York Times best seller; The Ghostly Carousel; and most recently, Up Verses Down (2019). He has also illustrated the work of a variety of authors, including James Thurber, Daniel Pinkwater, Edward Lear, and F. Scott Fitzgerald. Brown's illustrations have appeared in Newsweek, The New Yorker, Rolling Stone, Time, and many other publications, and he has created art for murals, packaging, and animation. He lives and works in Providence, Rhode Island.