Home » In My Mosque 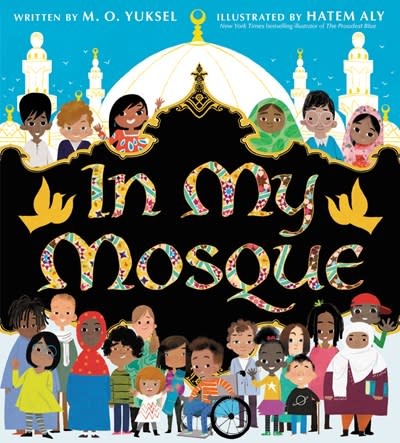 Perfect for Ramadan promotions, IN MY MOSQUE is a lyrical picture book by debut author M.O. Yuksel that celebrates the joys and traditions found in mosques around the world with artwork by New York Times bestselling illustrator Hatem Aly and extensive backmatter.

No matter who you are or where you’re from, step in and discover all the rituals and wonders of the mosque—everyone is welcome here. From grandmothers reading lines of the Qur’an and the imam telling stories of living as one, to meeting new friends and learning to help others, mosques are centers for friendship, community, and love.

M.O. Yuksel is a children’s book author who grew up attending many beautiful mosques around the world. With roots in Turkey and Uzbekistan, she loves writing about diverse cultures and fascinating historical figures. She currently lives in New Jersey with her husband and three sons. Visit her online at moyuksel.com. Hatem Aly is an Egyptian-born illustrator whose work has been published all over the world. When he was a child, he would imagine shapes forming on the mosque’s carpet if he stared down long enough, which then swiftly disappeared and transformed into beautiful patterns when he looked up. He is pretty much the same as a grown up, too. His illustrations have earned multiple starred reviews and positions on the New York Times bestseller list including The Proudest Blue (with Ibtihaj Muhammad & S.K. Ali), the Yasmin series (with Saadia Faruqi), and The Inquisitor’s Tale (with Adam Gidwitz). He currently lives in beautiful New Brunswick, Canada, with his wife, son, and more pets than people.