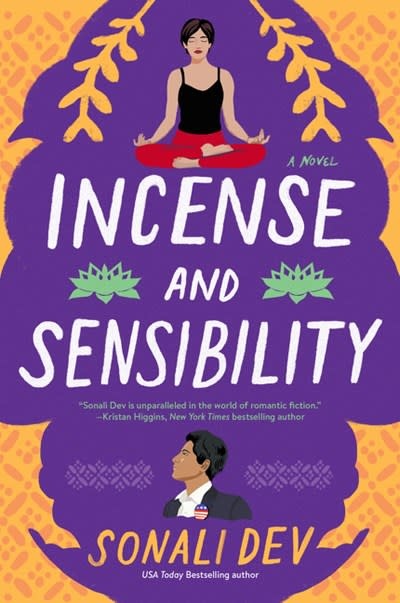 A Paperback OriginalThe author of Recipe for Persuasion—“not only one of the best but one of the bravest romance novelists working today” (Shelf Awareness)—adds an Indian American twist to Jane Austen's classic Sense and Sensibility in this delightful retelling that is a feast for the senses.

Yash Raje, California’s first serious Indian gubernatorial candidate, has always known exactly what he wants—and how to use his privileged background to get it. He attributes his success to a simple mantra: control your feelings and you can control the world.But when a hate-fueled incident at a rally critically injures his friend, Yash’s easy life suddenly feels like a lie, his control an illusion. When he tries to get back on the campaign trail, he blacks out with panic.Desperate to keep Yash’s condition from leaking to the media, his family turns to the one person they trust—his sister’s best friend, India Dashwood, California’s foremost stress management coach. Raised by a family of yoga teachers, India has helped San Francisco’s high strung overachievers for a decade without so much as altering her breath. But this man—with his boundless ambition, simmering intensity, and absolute faith in his political beliefs—is like no other. Yash has spent a lifetime repressing everything to succeed.Including their one magical night ten years ago—a too brief, too bright passion that if rekindled threatens the life he’s crafted for himself. Exposing the secrets might be the only way to save him but it’s also guaranteed to destroy the dream he’s willingly shouldered for his family and community . . . until now.

USA Today bestselling author Sonali Dev writes Bollywood-style love stories that explore universal issues. Her novels have been named Best Books of the Year by Library Journal, NPR, the Washington Post, and Kirkus Reviews, and she has won numerous accolades, including the American Library Association’s award for best romance, the RT Reviewer Choice Award for best contemporary romance, and multiple RT Seals of Excellence. Dev has been a RITA® finalist and has been listed for the Dublin Literary Award. She lives in Chicagoland with her husband, two visiting adult children, and the world’s most perfect dog.