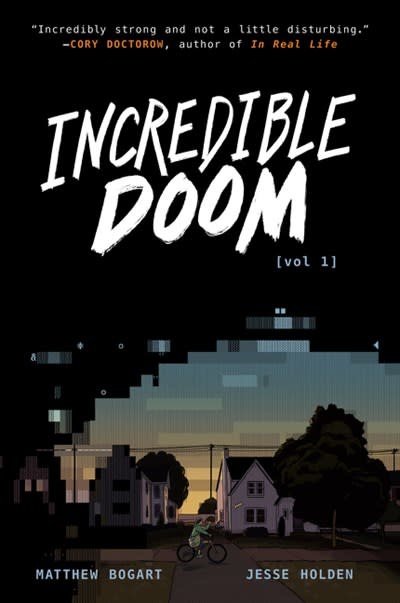 Incredible Doom is a compulsively readable YA graphic novel about unlikely alliances, daring escapes, stage magic, young love, and minor crime sprees all squeezed over dial-up modem connections in the early days of the internet.

It’s the dawn of a new age…the age of the internet. Allison is drowning under the weight of her manipulative stage magician father. When he brings home the family’s first computer, she escapes into a thrilling new world where she meets Samir, a like-minded new online friend who has just agreed to run away from home with her. After moving to a new town and leaving all of his friends behind, Richard receives a mysterious note in his locker with instructions on how to connect to “Evol BBS,” a dial-in bulletin board system, and meets a fierce punk named Tina who comes into his life and shakes his entire world view loose. Unlikely alliances, first love, and minor crime sprees abound in this teen graphic novel debut about making connections while your world is falling apart.

Matthew Bogart is a cartoonist living in Portland, Oregon. He makes slice of life comics and has been a member of the XOXO Outpost creative community, was a cofounder of Couch Gallery, and has been publishing comics since he was ten and his father let him loose on the office photocopier. Jesse Holden is a writer, designer, and creative collaborator on comics, novels, podcasts, and video games. He ruined his wrist for a week drawing his first twenty-four-hour comic in 1999, and now appreciates developing the stories and letting more talented people do the illustration. He lives in Portland with his dog, Fergus.