Home » Indestructibles: The Wheels on the Bus 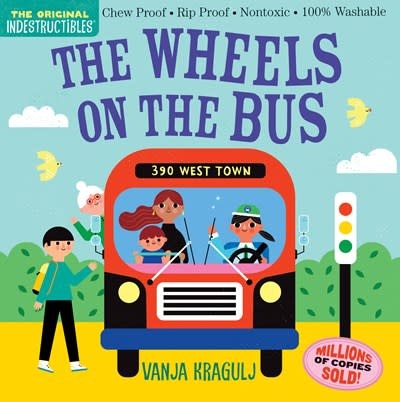 Indestructibles: The Wheels on the Bus

A new addition to the bestselling Indestructibles line of drool-proof, rip-proof, washable books for babies: The beloved song "The Wheels on the Bus" is a favorite to get babies singing along and moving.

They’re called Indestructibles. They could just as well be called the unstoppables! As in they don’t stop selling, don’t stop pleasing, and don’t stop filling an essential need for new parents: a book made for the way babies “read,” with their hands and mouths. And now this bestselling series—which ships over 1 million copies every year—is welcoming two new titles based on two of the most popular songs that parents love to sing along with their youngest. Each is illustrated in a bright, lively, colorful style, by the artist Vanja Karguli.

Moving from country to town, The Wheels on the Bus sends parents and their kids on an adventure that everyone loves to act out, from the wipers that go swish swish swish and the horn that goes beep beep beep to the people that go shh shh shh to the babies who cry wah wah wah. As they say, it’s all about the journey, not the destination.

As a reminder, The Original Instructibles are chew-proof, drool-proof, rip-proof —and 100% non-toxic. And when they do get dirty, just throw them in the dishwasher. All for $5.95.

Vanja Kragulj is a Canadian illustrator and graphic designer originally from former Yugoslavia. She studied Visual Communications Design at Alberta University of the Arts and started out as an illustrator and graphic designer for children’s fashion in Montreal, Quebec. Since then, she has worked as a freelance graphic designer and illustrator on projects ranging from children’s product design, environmental graphics design, commercial illustration, public art and children’s publishing. Vanja’s work is inspired by her graphic design background making composition, color, and patterns key. She is passionate about creating work that is fun, colorful and adds beauty to the world. When she’s not illustrating, Vanja teaches children and adult illustration workshops and is a regular visitor to the local library children’s book section. She lives with her son Jun, husband Kenji and their miniature husky, in Calgary, Canada.

Amy Pixton, a mother of triplets, created Indestructibles after bits of traditional board books found their way into her babies' mouths.  Amy lives in Kansas City with her husband and their three children.