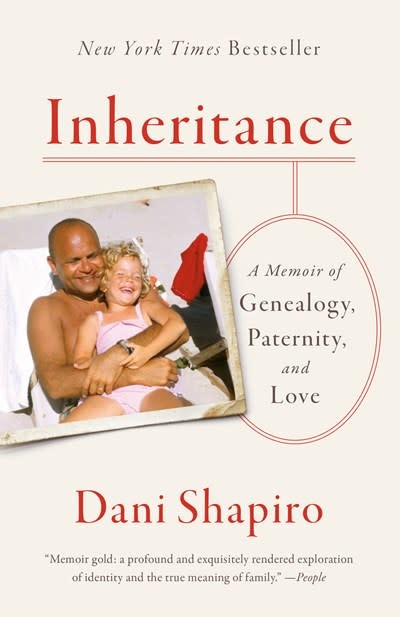 “Memoir gold: a profound and exquisitely rendered exploration of identity and the true meaning of family.” —People Magazine

From the acclaimed, best-selling memoirist, novelist and host of the hit podcast Family Secrets, comes a memoir about the staggering family secret uncovered by a genealogy test: an exploration of the urgent ethical questions surrounding fertility treatments and DNA testing, and a profound inquiry of paternity, identity, and love.

In the spring of 2016, through a genealogy website to which she had casually submitted her DNA for analysis, Dani Shapiro received the stunning news that her beloved deceased father was not her biological father. Over the course of a single day, her entire history—the life she had lived—crumbled beneath her.

Inheritance is a book about secrets. It is the story of a woman’s urgent quest to unlock the story of her own identity, a story that had been scrupulously hidden from her for more than fifty years. It is a book about the extraordinary moment we live in, a moment in which science and technology have outpaced not only medical ethics but also the capacities of the human heart to contend with the consequences of what we discover.

Dani Shapiro’s memoir unfolds at a breakneck pace—part mystery, part real-time investigation, part rumination on the ineffable combination of memory, history, biology, and experience that makes us who we are. Inheritance is a devastating and haunting interrogation of the meaning of kinship and identity, written with stunning intensity and precision.

DANI SHAPIRO is the author of the New York Times bestselling memoir Inheritance, as well as Hourglass, Still Writing, Devotion, and Slow Motion and five novels including Black & White and Family History. Also an essayist and a journalist, Shapiro’s short fiction, essays, and journalistic pieces have appeared in The New Yorker, Granta, Tin House, One Story, Elle, Vogue, O, The Oprah Magazine, The New York Times Book Review, the op-ed pages of the New York Times, and many other publications. She has taught in the writing programs at Columbia, NYU, the New School, and Wesleyan University; she is cofounder of the Sirenland Writers Conference in Positano, Italy. Shapiro is the host of the hit podcast, Family Secrets. She lives with her family in Litchfield County, Connecticut.