Home » It Could Be Worse 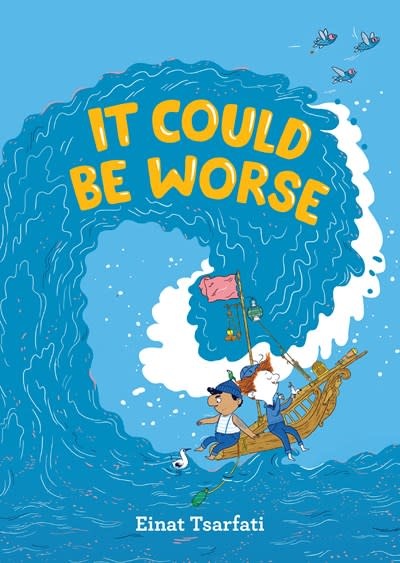 It Could Be Worse

Could it get any worse? Two shipwrecked sailors have different views of an absurd series of dilemmas in a wry, visually lavish tale for pessimists and optimists alike.

As a pair of shipwrecked sailors float on what’s left of their ship, Albertini is none too happy. The rain, he observes, is unfair enough. Then the flying fish appear overhead—the ones with the sick stomachs. And the singing mermaids, leaving infernal earworms in their wake. There’s the ghost ship full of pirates and the ark teeming with ravenous beasts. But no matter how bad the situation seems, George, cheerfully playing his harmonica, reminds his friend it could always be worse. Ahhhh! But hang on…is that a giant whale with an overpowering case of tuna breath? Delightfully detailed illustrations add visual comedy to a meditation on tough times that shows that even the worst days can turn around—especially with friends.