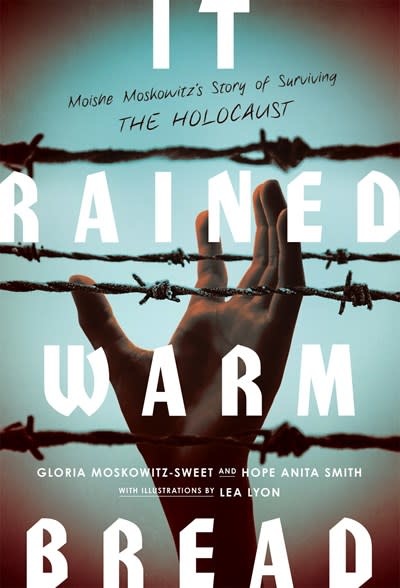 A powerful middle-grade novel-in-verse about a boy's experience surviving the Holocaust.

Moishe was thirteen when the Nazis invaded Poland in 1939 and he was sent to Auschwitz. His home was ravaged, his family torn apart by illness and abduction. Years of brutality drew on as Moishe moved from one labor camp to the next. Finally, towards the end of the war and at the peak of Moishe’s deepest despair, a simple act of kindness by a group of courageous Czech women redeemed his faith that goodness could survive the trials of war: That was the day it rained warm bread. Deftly articulated and beautifully illustrated, this is a strong addition to the ever-important genre of Holocaust testimonies.

Hope Anita Smith received a Coretta Scott King Honor for Keeping the Night Watch, the John Steptoe New Talent Award for The Way a Door Closes, and the Arnold Adoff Poetry Award for her first picture book, My Daddy Rules the World, among many other honors and starred reviews. She is also the author of Mother Poems. A professional storyteller, Hope teaches poetry-writing workshops to all grade levels. hopeanitasmith.com

Gloria Moskowitz-Sweet is the co-founder of Digital TAT2, a non-profit that works directly with students to encourage a kinder digital culture. Gloria is the daughter of Holocaust survivor Moishe Moskowitz.