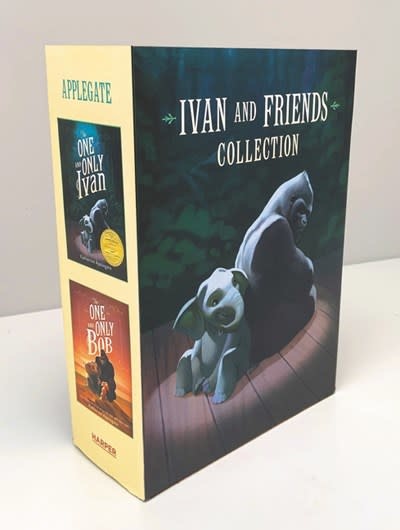 Meet the unforgettable characters Ivan and Bob in this hardcover box set including the award-winning modern classic The One and Only Ivan, soon to be a major motion picture, and its heartwarming sequel, The One and Only Bob!

Find the Newbery Medal winning modern classic, The One and Only Ivan, and its incredible sequel, The One and Only Bob, in this hardcover box set!Ivan is an easy-going gorilla. Living at the Exit 8 Big Top Mall and Video Arcade, he has grown accustomed to humans watching him through the glass walls of his domain. He rarely misses his life in the jungle. Mostly, he thinks about art. Then he meets Ruby, a baby elephant taken from her family, and she makes Ivan see their home—and his own art—through new eyes. When Ruby arrives, change comes with her, and it’s up to Ivan to make it a change for the better.Continuing the story of these friends in The One and Only Bob, Bob sets out on a dangerous journey in search of his long-lost sister with the help of Ivan and Ruby. As a hurricane approaches and time is running out, Bob finds courage he never knew he had and learns the true meaning of friendship and family.

Katherine Applegate is the Newbery Medal-winning and #1 New York Times bestselling author of numerous books for young readers, including The One and Only Ivan, The One and Only Bob, the Endling series, Crenshaw, Wishtree, the Roscoe Riley Rules chapter books series, and the Animorphs series. She lives with her husband, who writes as the author Michael Grant, and their children in California. Website: www.katherineapplegate.comTwitter: www.twitter.com/kaaauthor