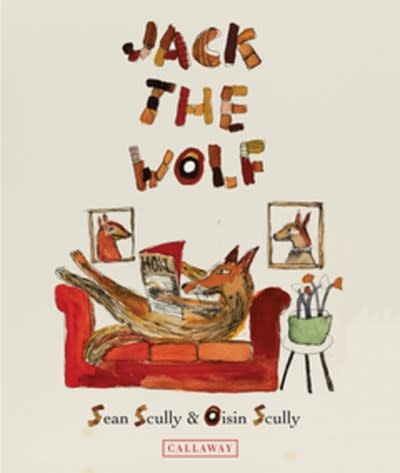 Jack the Wolf lives in a beautiful cave on a short mountain, near Colorfull Town. Jack is a happy and benevolent wolf, with only one weakness: CHOCOLATE.Follow Jack the Wolf through the pages of this beautifully illustrated picture book by world-renowned artist Sean Scully and his son Oisin Scully, to discover the trouble Jack causes to the children of Colorfull Town in his nightly hunts for chocolate dinners, and how his new friend Rebecca the Rabbit helps him restore happiness to the sad children of the town.

Oisin Scully was born in 2009 and was named after the greatest warrior poet of Irish mythology. Oisin the warrior poet lived in Tír na NÓg, the land of eternal youth. Oisin the boy lives in the Hudson Valley, and goes to Blue Rock School in Nyack. Oisin the boy is also a poet, and when he's not making up stories and drawing with his Dad, Oisin can be found making up stories and poems with his friends, and going on adventures with his best friend Doggie Bow-Wow. Oisin's favorite animal is the wolf, however all animals like Oisin, whether he wants them to or not! So if you ever want to find him yourself, all you have to do is drive around the Hudson Valley looking for a trail of dogs, cats, birds, and even the odd rabbit, following a boy with curly hair. Luckily no real wolves follow him though. That would be dangerous.Sean Scully was born in Dublin, Ireland, and now lives and works between New York, Bavaria, and London. He has been shortlisted twice for the Turner Prize and his work is in the collection of virtually every major museum around the world. In 2014, he became the only Western artist to have had a career-length retrospective exhibition in China (Follow the Heart: The Art of Sean Scully 1964 - 2014 that included over 100 paintings and traveled from Shanghai to Beijing). Current solo exhibitions include the first US Museum show of the Landline series at The Hirshhorn Museum and Sculpture Garden, a retrospective titled Vita Duplex at the Staatliche Kunsthalle Karlsruhe, Germany, and the first major exhibition of his sculptures at the Yorkshire Sculpture Park, in Great Britain, among others. In 2019 Scully had solo exhibitions at the Wadsworth Atheneum Museum of Art in Connecticut, the National Gallery of Art in London, the Albertina Museum in Vienna, Villa Panza in Varese, Italy, and at San Giorgio Maggiore for the 58th Venice Art Biennale, among others.