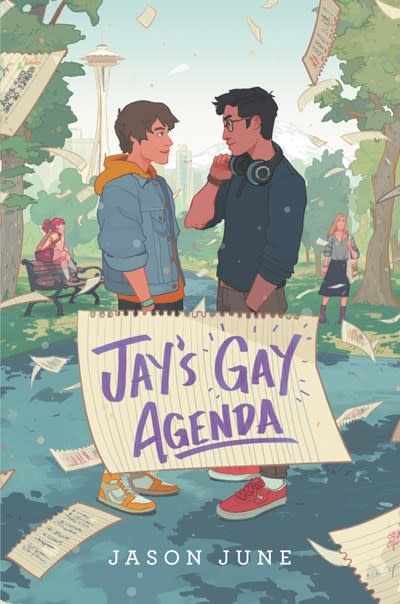 From debut novelist Jason June comes a moving and hilarious sex-positive story about the complexities of first loves, first hookups, and first heartbreaks—and how to stay true to yourself while embracing what you never saw coming, that’s perfect for fans of Sandhya Menon and Becky Albertalli.

There’s one thing Jay Collier knows for sure—he’s a statistical anomaly as the only out gay kid in his small rural Washington town. While all his friends can’t stop talking about their heterosexual hookups and relationships, Jay can only dream of his own firsts, compiling a romance to-do list of all the things he hopes to one day experience—his Gay Agenda.Then, against all odds, Jay’s family moves to Seattle and he starts his senior year at a new high school with a thriving LGBTQIA+ community. For the first time ever, Jay feels like he’s found where he truly belongs. But as Jay begins crossing items off his list, he’ll soon be torn between his heart and his hormones, his old friends and his new ones . . . because after all, life and love don’t always go according to plan.

Jason June is a gay, genderqueer, list-making, Virgo Sun, Taurus Moon, Pokémon-playing writer living in Austin, Texas. If he had a Gay Agenda, "marry the love of your life," "be mom to two extremely pampered Pomeranians," and "get accidentally kicked in the face by Kylie Minogue as an extra in her music video" would all be crossed off. Visit Jason June on social media @heyjasonjune and on his website at heyjasonjune.com.