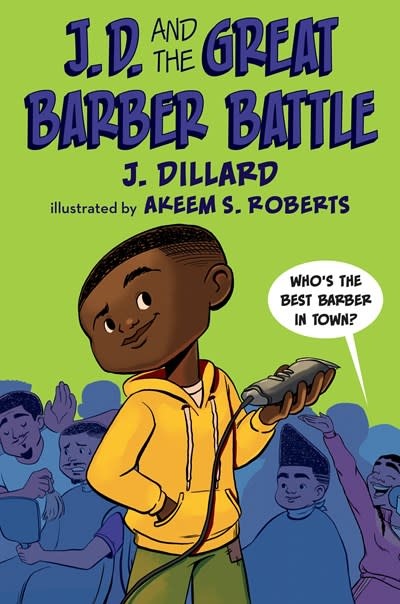 J.D. and the Great Barber Battle

J.D. has a big problem—it’s the night before the start of third grade and his mom has just given him his first and worst home haircut. When the steady stream of insults from the entire student body of Douglass Elementary becomes too much for J.D., he takes matters into his own hands and discovers that, unlike his mom, he’s a genius with the clippers. His work makes him the talk of the town and brings him enough hair business to open a barbershop from his bedroom. But when Henry Jr., the owner of the only official local barbershop, realizes he’s losing clients to J.D., he tries to shut him down for good. How do you find out who’s the best barber in all of Meridian, Mississippi? With a GREAT BARBER BATTLE!

From the hilarious and creative mind of J. Dillard, an entrepreneur, public speaker, and personal barber, comes a new chapter book series with characters that are easy to fall for and nearly impossible to forget. Akeem S. Roberts’ lively illustrations make this series a must-buy for reluctant readers.

Series Overview: An illustrated chapter book series about a kid barber in Meridian, Mississippi, and his growing business empire. Titles include: J.D. and the Great Barber Battle (spring 2021), J.D. and the Family Business (summer 2021), and J.D. and the Hair Show Showdown (fall 2021).

J. Dillard (known as the “Barberpreneur”) is a former managing partner for ConAllegiance, a consulting firm based out of Atlanta, Georgia. He is a master barber, a certified consultant, and an industry leader who started cutting his own hair at the age of ten. After many trials and tribulations, he began cutting hair professionally in 1999 and became a shop owner while attending college at Tuskegee University in Alabama. He travels the country with his clients as a personal barber and calls Atlanta home. This is his first book series for children.

Akeem S. Roberts is an illustrator based in Brooklyn. He works as an in-house animator for Holler Studios and contributes cartoons regularly to The New Yorker. He is a graduate of the University of South Carolina. When Akeem is not working, he likes to eat food (who doesn't?), drink coffee, and make comics about his day-to-day life on Instagram.