Home » The Square Root of Possible: A Jingle Jangle Story 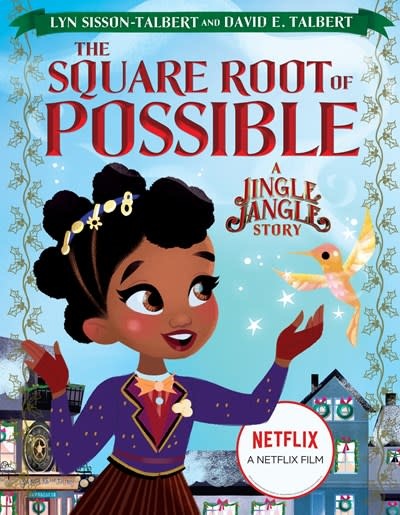 The Square Root of Possible: A Jingle Jangle Story

A charming picture book story based on the Netflix holiday film Jingle Jangle, starring Phylicia Rashad, Forrest Whitaker, Anika Noni Rose, Keegan Michael Key, and newcomer Madalyn Mills, about an eccentric toymaker, his adventurous granddaughter, and a magical invention, that if they can get it to work in time for the holidays, could change their lives forever.

This charmingly illustrated holiday picture book captures “The Square Root of Impossible,” the standout musical number from Jingle Jangle, Netflix’s first live-action musical. Jingle Jangle follows an embattled toymaker Jeronicus Jangle, played by Academy Award winner Forest Whitaker, and his precocious granddaughter Journey (newcomer Madalyn Mills). When Journey arrives in Cobbleton, she’s surprised to discover her grandfather isn’t the famed inventor she thought he was, but the owner of a rundown pawnshop. Journey resolves to put her own inventing prowess, her creativity, and her jolly disposition to work and help her grandfather find his merry, bringing the magic of his toy workshop to life just in time for Christmas.

Heralded by the Los Angeles Times as “one of the most prolific theater makers in America,” David E. Talbert’s heartfelt depictions of life and love, mixed with his ability to infuse comedy in the midst of chaos, have captivated audiences across the country, making Talbert a highly sought-after content creator across all platforms. In 2002, Talbert signed with Simon & Shuster, penning the national bestsellers Baggage Claim and Love on the Dotted Line. The success of both spawned a collaboration with hip-hop icon Snoop Dogg for The Doggy Tale series. In 2008, Talbert made his feature directorial debut with the Sony Pictures comedy First Sunday, starring Ice Cube, Tracy Morgan, and enigmatic comedian Katt Williams - which opened as America’s #1 Comedy. In 2013, his second film, Fox Searchlight’s Baggage Claim, marked the first time an African American author adapted and directed his own novel.