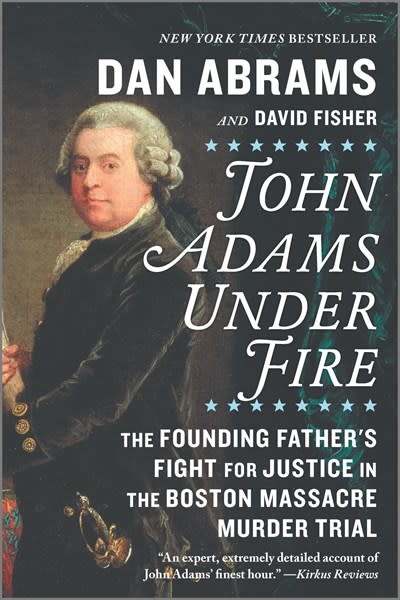 John Adams Under Fire: The Founding Father's Fight for Justice in the Boston Massacre Murder Trial

The eye-opening story of America on the edge of Revolution as John Adams volunteered to defend the British soldiers in a high-profile murder case, told through his own words and trial transcripts, by the New York Times bestselling author and host of Live PD Dan Abrams.

“Facts are stubborn things,” John Adams thundered to the jury in closing one of the most important trials in American history. As the bitterness of New England colonies threatened to explode into war with England, young John Adams accepted the greatest challenge of his life: Defending the already notorious British soldiers who had killed five colonists. The Boston Massacre of March 5, 1770, has often been called the first shots of the American Revolution. “On that night,” Adams recalled, “The formation of American independence was born.” With blood still staining the snow-covered streets, Adams recognized that only the rule of law, not the passion of the mob, would prevent further mayhem. He agreed to represent the soldiers, risking his law practice and his future. In the process he helped create some of the foundations of what would become pillars of United States law. In this book, New York Times bestselling authors Dan Abrams and David Fisher draw on the largely forgotten trial transcript, using Adams’ own words to transport readers to colonial Boston, a city roiling with rebellion, to tell the incredible story of Founding Father John Adams courage and his belief that whatever was to happen, it was dependent on “A government of laws, and not of men.”

DAN ABRAMS is the chief legal affairs correspondent for ABC News as well as the host of top-rated Live PD on A&E Network and The Dan Abrams Show: Where Politics Meets the Law on SiriusXM. A graduate of Columbia University Law School, he is CEO and founder of Abrams Media, which includes the Law & Crime network. He lives in New York. DAVID FISHER is the author of twenty-five New York Times bestsellers. He lives in New York with his wife, Laura. Together, they are the authors of the New York Times bestsellers Lincoln's Last Trial,which received the 2018 Barondess/Lincoln Award, and Theodore Roosevelt for the Defense.