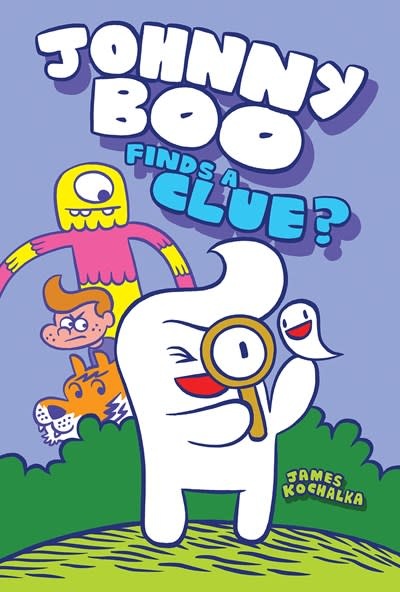 Johnny Boo and Squiggle team up with old friends in a jaw-dropping new adventure—to solve a very silly mystery!

The Eisner-Award-winning Johnny Boo series just keeps getting wilder and funnier! This time, a secret thief has stolen Johnny Boo’s ice cream. Armed with his mighty magnifying glass, Johnny Boo will find all the clues and capture the vicious villain. The main suspect is a purple mountain whose peak looks suspiciously like it might be covered in vanilla ice cream. To battle this giant foe, Johnny Boo and his friends must team up and transform into their ultimate form: the MEGA JOHNNY ULTRA-BOO!…But what if the mountain is innocent?

James Kochalka is, without question, one of the most unique and prolific alternative cartoonists working in America today. His comics have been published internationally by almost every alternative comics publisher; he’s recorded several music albums under the name James Kochalka Superstar (making him a favorite at college radio stations across the country); and he’s developed animated cartoons for Nickelodeon and Cartoon Hangover.

He is the first official Cartoonist Laureate of the state of Vermont, appointed in 2011.

Among his best known works are the Monkey vs Robot series, the superpowered frathouse comedy SuperF*ckers, the beloved children’s series Johnny Boo, Dragon Puncher, and Glorkian Warrior, and his magnum opus, the 14-year span of daily diary comics known as American Elf.