Home » Josie Bloom and the Emergency of Life 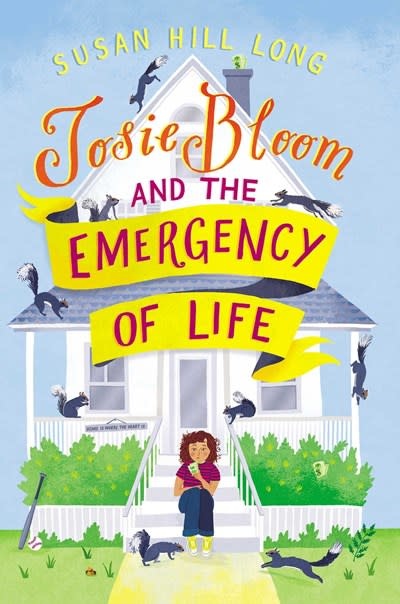 Josie Bloom and the Emergency of Life

“Nails the voice of a kid trying as hard as she can to tackle adult problems.” —Publishers Weekly

Josie Bloom is put to the test when she’s confronted with mysterious wads of money, a washed-up baseball player, and a whole lot of squirrels in this hilarious and heartwarming novel in the spirit of Kate DiCamillo’s Raymie Nightingale.

Josie Bloom discovers the first wad of money stuffed inside a packet of bologna, and the second hidden between the trashcan and the bin liner. That money comes in handy when she finds the PAST DUE notice from the heating company. Seems like Grandpa has been spending more time feeding squirrels than paying the bills. But when a bill arrives that’s too big to handle, Josie’s going to need a plan to get more money—while keeping Grandpa’s odd behavior a secret.

Hilarious and heartwarming, Josie Bloom and the Emergency of Life celebrates the lengths family and friends will go to when it looks like the squirrels are winning.

Susan Hill Long is the author of Josie Bloom and the Emergency of Life; The Magic Mirror: Concerning a Lonely Princess, a Foundling Girl, a Scheming King, and a Pickpocket Squirrel; and Whistle in the Dark, which Publishers Weekly said “sings with graceful recurring motifs, true emotions, and devastating observations about the beauty that can be found in the darkest hours” in a starred review. It was named a best book of the year by Bank Street and Publishers Weekly. Susan lives in Portland, Oregon, with her family. Learn more at SusanHillLong.com.