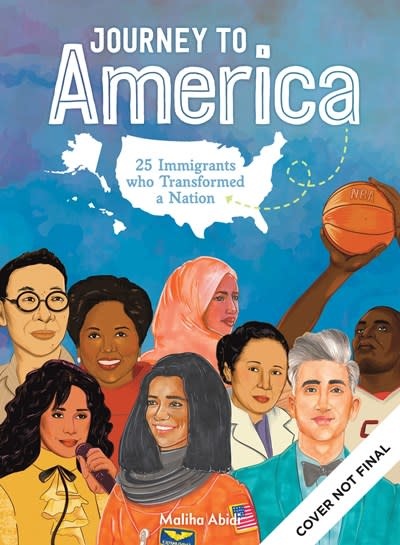 Journey to America is a beautiful collection of biographies celebrating 25 of America’s most inspiring immigrants.

A timely, beautiful exploration of America’s rich history of diversity, Journey to America profiles 25 immigrants and children of immigrants who have affected the nation’s culture or business.

Author-illustrator Maliha Abidi’s striking illustrated portraits bring the personalities to life in vivid color. Sidebars explain historical and political facts about the immigration process, highlighting the differences between a permanent resident and a citizen, a first- and second-generation American, and more.

As children develop their own dreams for the future, the diverse stories and accomplishments of these American immigrants serve as inspiration.

Maliha Abidi is a Pakistani immigrant, author-illustrator, and med student who has worked with organizations such as the United Nations, Adobe, Rebel Girls, and Peace Corporation. She has been featured in BBC, Good Morning America, and Malala Fund. Her debut, Pakistan for Women, celebrated fifty extraordinary Pakistani women.