Home » K: A History of Baseball in Ten Pitches 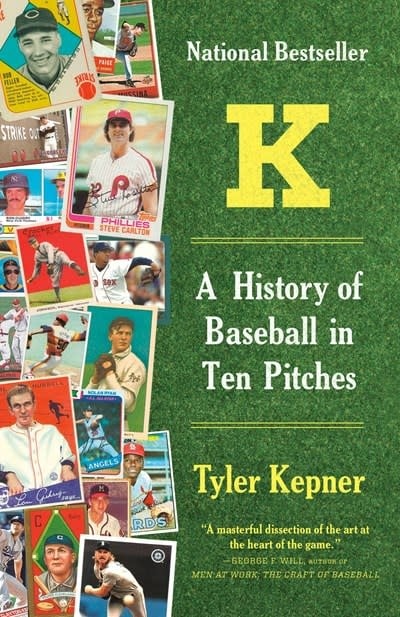 K: A History of Baseball in Ten Pitches

From The New York Times baseball columnist, an enchanting, enthralling history of the national pastime as told through the craft of pitching, based on years of archival research and interviews with more than three hundred people from Hall of Famers to the stars of today.

The baseball is an amazing plaything. We can grip it and hold it so many different ways, and even the slightest calibration can turn an ordinary pitch into a weapon to thwart the greatest hitters in the world. Each pitch has its own history, evolving through the decades as the masters pass it down to the next generation. From the earliest days of the game, when Candy Cummings dreamed up the curveball while flinging clamshells on a Brooklyn beach, pitchers have never stopped innovating.

In K: A History of Baseball in Ten Pitches, Tyler Kepner traces the colorful stories and fascinating folklore behind the ten major pitches. Each chapter highlights a different pitch, from the blazing fastball to the fluttering knuckleball to the slippery spitball. Infusing every page with infectious passion for the game, Kepner brings readers inside the minds of combatants sixty feet, six inches apart.

Filled with priceless insights from many of the best pitchers in baseball history—from Bob Gibson, Steve Carlton, and Nolan Ryan to Greg Maddux, Mariano Rivera, and Clayton Kershaw—K will be the definitive book on pitching and join such works as The Glory of Their Times and Moneyball as a classic of the genre.

TYLER KEPNER started covering baseball as a teenager, interviewing players for a homemade magazine that was featured in The New York Times in 1989. He attended Vanderbilt University on the Grantland Rice/Fred Russell sportswriting scholarship, then covered the Angels for the Press-Enterprise (Riverside, Calif.) and the Mariners for the Seattle Post-Intelligencer. He joined The New York Times in 2000, covering the Mets for two seasons, the Yankees for eight, and serving as the national baseball writer since 2010.