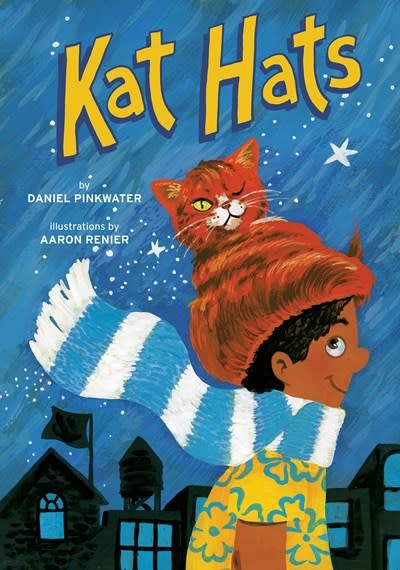 A wild picture book starring a world-renowned cat, his trainer, a cast of quirky characters from award-winning creators Daniel Pinkwater and Aaron Renier

Thermal Herman 6-7/8 is the top Kat Hat in Matt Katz’s company. A trained cat who is able to form himself into specialty hats, Thermal Herman is world-renowned for his warmth and agility. When a friend wanders off with a brain freeze and finds themself in peril, Thermal Herman must rush in to save the day in this zany and cleverly illustrated picture book, sure to make young readers giggle with every page.

Daniel Pinkwater is, in brief, the author and sometimes illustrator of more than 100 (and counting) books, including his timeless The Big Orange Splot, which has sold more than one million copies. He is also an occasional commentator on NPR's All Things Considered and appears regularly on Weekend Edition Saturday, where he reviews exceptional kids' books with host Scott Simon. Aaron Renier is the author of three graphic novels for younger readers: Spiral-Bound, The Unsinkable Walker Bean, and The Unsinkable Walker Bean and the Knights of the Waxing Moon. He received the Eisner Award in 2006 for Talent Deserving of Wider Recognition, and was an inaugural resident for the Sendak Fellowship in 2010. He teaches drawing and comics at universities in Chicago.