Home » Keep It Moving: Lessons for the Rest of Your Life 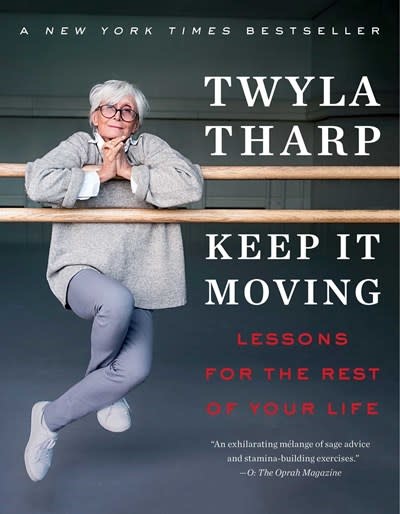 Keep It Moving: Lessons for the Rest of Your Life

One of the world’s legendary artists and bestselling author of The Creative Habit shares her secrets—from insight to action—for harnessing vitality, finding purpose as you age, and expanding one’s possibilities over the course of a lifetime in her newest New York Times bestseller Keep It Moving.

At seventy-eight, Twyla Tharp is revered not only for the dances she makes—but for her astounding regime of exercise and nonstop engagement. She is famed for religiously hitting the gym each morning at daybreak, and utilizing that energy to propel her breakneck schedule as a teacher, writer, creator, and lecturer. This book grew out of the question she was asked most frequently: “How do you keep working?”

Keep It Moving is a series of no-nonsense mediations on how to live with purpose as time passes. From the details of how she stays motivated to the stages of her evolving fitness routine, Tharp models how fulfillment depends not on fortune—but on attitude, possible for anyone willing to try and keep trying. Culling anecdotes from Twyla’s life and the lives of other luminaries, each chapter is accompanied by a small exercise that will help anyone develop a more hopeful and energetic approach to the everyday.

Twyla will tell you what the beauty-fitness-wellness industry won’t: chasing youth is a losing proposition. Instead, Keep It Moving focuses you on what’s here and where you’re going—the book for anyone who wishes to maintain their prime for life.

Twyla Tharp, one of America’s greatest choreographers began her career in 1965, and has created more than 130 dances for her company as well as for the Joffrey Ballet, the New York City Ballet, the Paris Opera Ballet, London’s Royal Ballet, Denmark’s Royal Ballet, and American Ballet Theatre. She has won two Emmy Awards for television’s Baryshnikov by Tharp, and a Tony Award for the Broadway musical Movin’ Out. The recipient of a MacArthur Fellowship, she was inducted into the American Academy of Arts & Sciences in 1993 and was made an honorary member of the American Academy of Arts and Letters in 1997. She holds nineteen honorary degrees, most recently from Harvard University. She lives and works in New York City.