Home » Kevin the Unicorn: Why Can't We Be Bestie-corns? 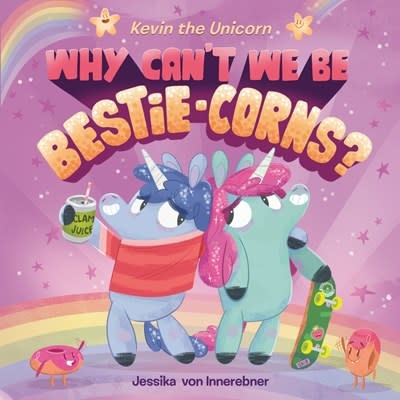 Kevin the Unicorn: Why Can't We Be Bestie-corns?

Kevin the Unicorn learns that you can’t force a friendship in this companion to Kevin The Unicorn: It’s Not All Rainbows

When a new unicorn moves in next door, Kevin is certain he’s about to make a new magically awesome best friend. After all, everyone loves unicorns (especially other unicorns)! But it turns out Eric loves scary movies (eek!) and clam juice (blech!) and he doesn’t like camping or skateboarding or any of the activities Kevin adores. In fact, apart from his sparkly mane and radiant horn, Eric doesn’t have all that much in common with Kevin. Could it be that Eric and Kevin aren’t destined to be the best of buds?

Jessika von Innerebner is a self-taught artist who landed her first illustration job at seventeen and has been coloring her way through studios like Disney and Atomic Cartoons ever since. Jess is the illustrator of several picture books and chapter books and is the creator of the Kevin the Unicorn series. She and her illustrator husband live in Canada.