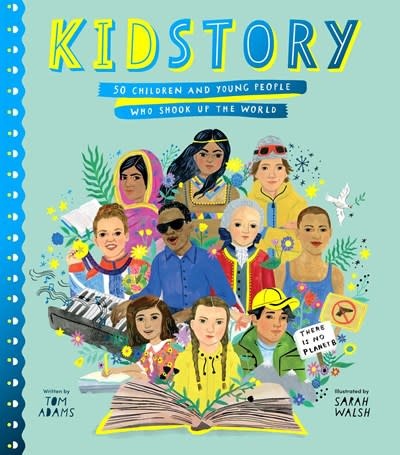 Learn about fifty amazing kids who changed the world in this beautifully illustrated collection of inspiring short biographies sure to empower and motivate in equal measure.

You don't have to be an adult to make a difference! This volume is the perfect introduction to just some of the incredible young people from all over the world who have influenced a cultural, political, or social change throughout history. From Louis Braille to Greta Thunberg, Pelé to Malala Yousafzai, these activists, inventors, artists, and athletes broke new ground with their passion, courage, and creativity.

Each lavishly illustrated spread features inspiring words from all of these young people and the true stories behind how their actions and achievements that shook up the world.

Tom Adams is an award-winning freelance executive producer, series producer, and writer with over twenty years experience in television production. His credits include numerous science and history documentaries, and he has made programs for Discovery Channel, National Geographic, and the History Channel. Tom won the 2013 ALCS Educational Writer Award for Molecule Mayhem. He is a member of the Association of British Science Writers.

Sarah Walsh grew up in upstate New York. When she was young she was obsessed with animals. So much so that she wanted to be one, and wore different animal costumes all year round. She also knew in her heart that she would be an artist someday…if she worked hard enough! Sarah is now an internationally published illustrator and lives with her family in Kansas City.