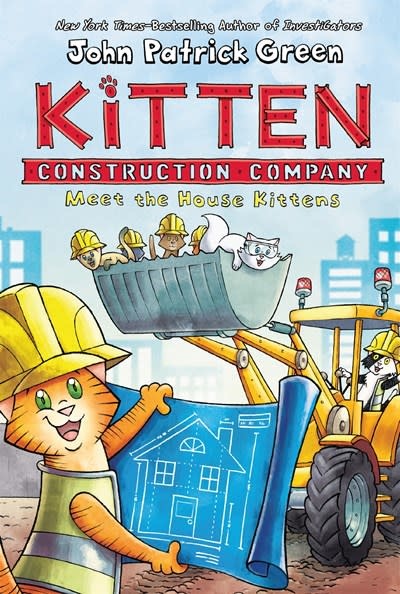 Meet the House Kittens! Construction has never been cuter than in this graphic novel for very young readers!

Can you be too cute for your own good? Sadly, the answer is yes. In a world where kittens and humans coexist, several talented kittens with skills in architecture, construction, engineering, and plumbing have discovered that nobody will take them seriously in the workplace because they are just too darned adorable.

So the kittens take matters into their own hands, and form their own all-feline firm: the Kitten Construction Company! They're going to build the best mayor's mansion the city has ever seen . . . just as soon as they can stop chasing laser pointers.

John Patrick Green is a human with the human job of making books about animals with human jobs, such as Hippopotamister, Kitten Construction Company, and the New York Times-bestselling InvestiGators. John is definitely not just a bunch of animals wearing a human suit pretending to have a human job. He is also the artist and co-creator of the graphic novel series Teen Boat!, with writer Dave Roman. John lives in Brooklyn in an apartment that doesn't allow animals other than the ones living in his head. johngreenart.com