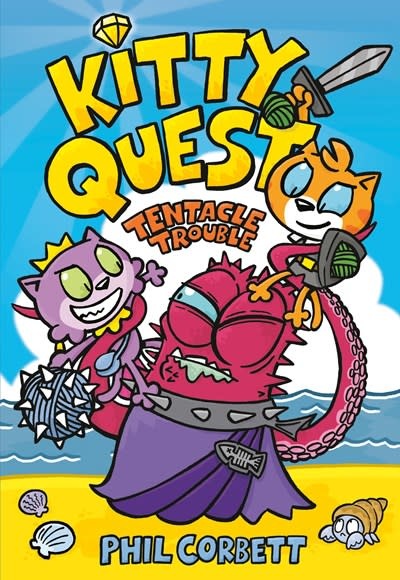 Perfect for fans Dog Man and The InvestGators, the laugh-out-loud adventures continue in the second book of this graphic novel series when the cats of Kitty Quest face off against an army of ludicrous sea monsters!

The islands of Pawdor are in peril once again! Ferocious sea monsters have been spotted on shore, and the townsfolk are in a complete panic. Luckily, there’s a new guild of heroes known as Kitty Quest that’s ready to protect the land. So what if Woolfrik and Perigold are its only members (besides their mentor who’s a ghost), and it’s just their second week on the job? They may be all that stands in the way of an invasion!

But how are these two amateur heroes supposed to stop a whole army of tentacled beasts? It may just take some quick thinking, a whole lot of luck, and a little help from the most unexpected of places. In order to save all of kitty-kind, Woolfrik and Perigold are going to have to learn to work together and prove that two heads are better than one.

Phil Corbett is a professional storyteller. He was the last person to write and illustrate the adventures of one of the oldest comic characters in the world, Korky the Cat, from the UK comic magazine The Dandy. He’s previously worked in the gaming and toy industry with clients such as Cartoon Network, Disney, Nickelodeon, Nintendo, and PlayStation. Kitty Quest is his debut graphic novel series. You can see more of his work at philcorbett.com.