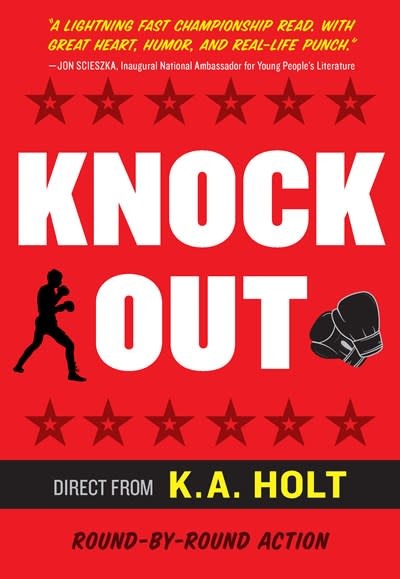 From the author of Rhyme Schemer and House Arrest comes Knockout, now available in paperback!

Knockout is a middle grade novel written from the perspective of a kid who wants nothing more than to be treated as normal.

When formerly medically fragile Levi discovers his love for boxing, he finds himself in the ring with those who love him most. He knows he's strong enough to fight for his life. But can he convince everyone else to believe in him, too?

• A heartwarming story of family, individuality, and siblinghood

As a baby, Levi had a serious disease that caused him respiratory issues. He's fine now, but his mom and overprotective brother still think of him as damaged, and his schoolmates see him as the same class clown he's always been. He feels stuck.

So when his dad—divorced from his mom—suggests he take up boxing, he falls in love with the sport. And when he finds out about a school with a killer boxing team and a free-study curriculum, it feels like he's found a ticket to a new Levi. But how can he tell his mom about boxing? And how can he convince his family to set him free?

This gripping, funny novel in verse looks at what it means to be a typical kid, and all the many definitions of strength.

• Perfect for parents of reluctant readers, educators and librarians, middle grade readers, new readers of poetry, and fans of boxing

• Recommended for children between the ages of 9 and 12

• Add it to the shelf with books like Rebound by Kwame Alexander, Wonder by R. J. Palacio, and Five Feet Apart by Rachael Lippincott.

A. Holt is the author of Rhyme Schemer, House Arrest, Redwood and Ponytail, and the Kids Under the Stairs series, along with several other books for young people. She lives in Austin, Texas, and is active within the vibrant Texas writing community.