Home » The Baby-Sitters Club 11 Kristy and the Snobs 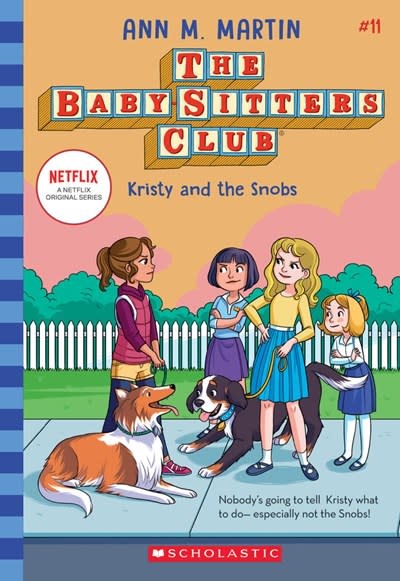 The Baby-Sitters Club 11 Kristy and the Snobs

America's favorite series returns with a new look and a Netflix tv show.

Kristy's mom got married again last summer and now Kristy and her family live in a new neighborhood. The kids there aren't very friendly. In fact, they're...well, snobs. They criticize Kristy's clothes. They make fun of the Baby-sitters Club. And worst of all, they laugh at Louie, Kristy's pet collie, who's going blind. Nobody does that and gets away with it!

Kristy's fighting mad--and she's not going to put up with it much longer. If anybody can beat a Snob Attack, it's the Baby-sitters Club. And that's just what they're going to do!

Ann M. Martin is the creator of The Baby-sitters Club, which has more than 180 million books in print, making it one of the most popular series in the history of publishing. Her novels include A Corner of the Universe (a Newbery Honor Book), Belle Teal, Here Today, A Dog's Life, On Christmas Eve, and the Main Street and Family Tree series, as well as the much-loved collaborations P.S. Longer Letter Later and Snail Mail No More, with Paula Danziger. Ann lives in upstate New York.