Home » Kudo Kids: The Mystery of the Masked Medalist 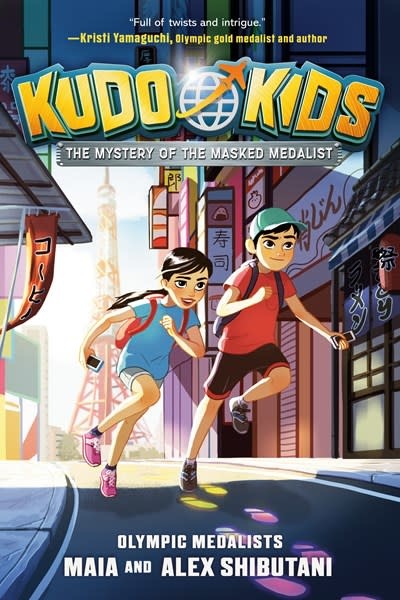 Kudo Kids: The Mystery of the Masked Medalist

Andy and Mika are going to Tokyo!

The Kudo Kids have never been to Japan before, so they can’t believe they get to attend the Summer Olympics there. The siblings plan to eat tons of delicious Japanese food, watch every event they can, and win a super-popular new game called OlympiFan.

Developed by a mysterious former medalist, OlympiFan brings players together from all over the world to search Tokyo for virtual medals and clues to the secretive creator’s identity. Andy loves puzzles, and he’s determined to crack this one, especially since the winning team will get to be beta testers for the Masked Medalist’s future games!

Mika wants to find as many clues as she can, but she also has a secret goal of her own—one that could get her into big trouble. But when someone sabotages the game, the Kudo Kids have an even bigger mystery to solve than the Masked Medalist’s identity. If they want to capture the gold, Mika and Andy have to figure out who’s trying to stop their team before someone beats them to the grand prize!

Maia and Alex Shibutani (aka the ShibSibs) are two-time Olympic bronze medalists, three-time world medalists, Four Continents Champions, and two-time U.S. National Champions. At the 2018 Winter Olympics, they became the first ice dancers of Asian descent to medal at the Olympics and are only the second sibling duo in the history of the sport to share an ice dancing medal.

Off the ice, the ShibSibs are known for sharing their personalities, experiences, and interests on social media to bring new audiences to their sport. They travel the world and enjoy spending time together (most of the time), eating food (all of the time), and meeting new people (any time!). The Mystery of the Masked Medalist is their first book.

Yaoyao Ma Van As is an illustrator, art director, vegan, and dog lover. She has a BFA in Art & Design and an MFA in Animation. Between working on animated television shows she likes to relax by illustrating quiet little moments in life. Yaoyao currently lives in Los Angeles, California, with her husband and four-legged baby.