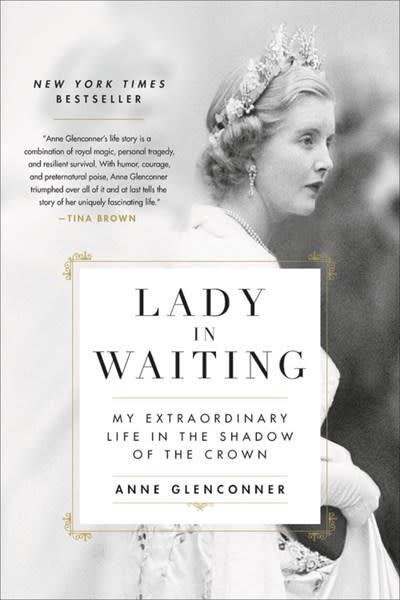 Discover untold secrets with this extraordinary memoir of drama and tragedy by Anne Glenconner—a close member of the royal circle and lady-in-waiting to Princess Margaret.

Anne Glenconner has been at the center of the royal circle from childhood, when she met and befriended the future Queen Elizabeth II and her sister, the Princess Margaret. Though the firstborn child of the 5th Earl of Leicester, who controlled one of the largest estates in England, as a daughter she was deemed "the greatest disappointment" and unable to inherit. Since then she has needed all her resilience to survive court life with her sense of humor intact.

A unique witness to landmark moments in royal history, Maid of Honor at Queen Elizabeth's coronation, and a lady in waiting to Princess Margaret until her death in 2002, Anne's life has encompassed extraordinary drama and tragedy. In Lady in Waiting, she will share many intimate royal stories from her time as Princess Margaret's closest confidante as well as her own battle for survival: her broken-off first engagement on the basis of her "mad blood"; her 54-year marriage to the volatile, unfaithful Colin Tennant, Lord Glenconner, who left his fortune to a former servant; the death in adulthood of two of her sons; a third son she nursed back from a six-month coma following a horrific motorcycle accident. Through it all, Anne has carried on, traveling the world with the royal family, including visiting the White House, and developing the Caribbean island of Mustique as a safe harbor for the rich and famous-hosting Mick Jagger, David Bowie, Raquel Welch, and many other politicians, aristocrats, and celebrities.

With unprecedented insight into the royal family, Lady in Waiting is a witty, candid, dramatic, at times heart-breaking personal story capturing life in a golden cage for a woman with no inheritance.

The Globe and Mail Bestseller

The Times (UK) Memoir of the Year

One of Newsweek's Most Anticipated Books of 2020

Lady Glenconner was born Lady Anne Coke in 1932, the eldest daughter of the 5th Earl of Leicester, and grew up at their ancestral estate at Holkham Hall in Norfolk, England. A Maid of Honor at the Queen's coronation, she married Lord Glenconner in 1956. They had five children together, three of whom survive. In 1958 she and her husband began to transform the island of Mustique into a paradise for the rich and famous. They granted a plot of land to Princess Margaret, who built her favorite home there. Anne Glenconner was appointed a Lady in Waiting to Princess Margaret in 1971 and kept this role—accompanying her on many state occasions and foreign tours—until the Princess's death in 2002. Lord Glenconner died in 2010. Lady Glenconner now lives in a farmhouse in Norfolk.