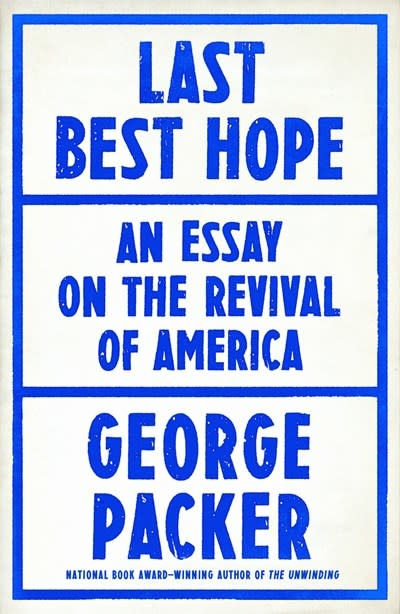 An acclaimed National Book Award?winning author diagnoses America’s descent into a failed state, and envisions a path toward overcoming our injustices, paralyses, and divides

How, in a few decades, did the United States transform from a broadly prosperous middle-class country, with relatively healthy institutions and competent leaders, to a nation defined by discredited elites, hollowed-out institutions, and blatant inequalities—feared and pitied by our friends, mocked and sabotaged by our adversaries, first in the world in COVID cases and deaths, and led in recent years by an incompetent authoritarian bigot? Last Best Hope is a bracing account of our current crisis and of how a new era of civic revitalization may bring it to an end.

Combining reportage with historical narrative, autobiography, and political analysis, George Packer depicts and assesses the four inadequate narratives that dominate American public life: Libertarian America, which imagines a nation of individuals responsible for their own fate, and serves the interests of corporations and the wealthy; Cosmopolitan America, the ideology of Silicon Valley and the professional elite, which celebrates globalization and leaves many American communities behind; Diverse America, which defines citizens as members of large identity groups that have inflicted or suffered oppression; and White America, a shallow nationalism that fears the contamination of non-whites and the treachery of coastal elites, and poses the greatest threat to democracy in our lifetime.

At a time when many fear that the American experiment in self-government may collapse, or, in Abraham Lincoln’s words, “die by suicide,” Packer shows that none of these narratives can sustain American democracy. To point a better way forward, he looks back at previous eras of crisis to discover the resources for invigorating self-government. Combining trenchant social analysis with a vibrant and stinging essayistic voice and a deep knowledge of America’s past and present, Last Best Hope is an essential contribution to the literature of national self-examination the times demand.

George Packer is a staff writer at The Atlantic and the author of many previous books, including The Unwinding (winner of the National Book Award), The Assassins’ Gate, and Our Man (a finalist for the Pulitzer Prize and winner of the Los Angeles Times Book Award for biography).