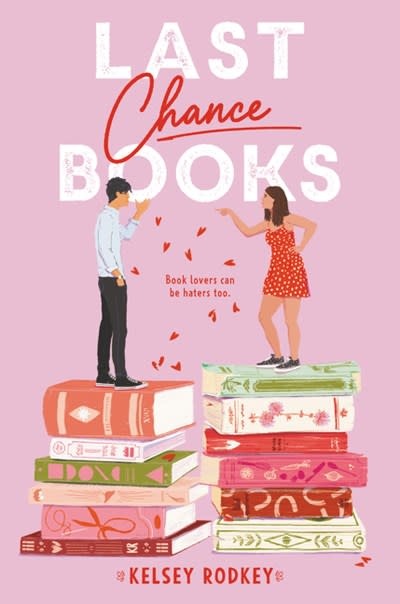 A girl determined to save her family’s bookstore is waylaid by an unexpected romance in this You’ve Got Mail for the next generation, perfect for fans of Jenny Han and Morgan Matson.

Don’t you just love the smell of old books in the morning?Madeline Moore does. Books & Moore, the musty bookstore her family has owned for generations, is where she feels most herself. Nothing is going to stop her from coming back after college to take over the store from her beloved aunt.Nothing, that is—until a chain bookstore called Prologue opens across the street and threatens to shut them down.Madeline sets out to demolish the competition, but Jasper, the guy who works over at Prologue, seems intent on ruining her life. Not only is he taking her customers, he has the unbelievable audacity to be . . . extremely cute.But that doesn’t matter. Jasper is the enemy and he will be destroyed. After all—all’s fair in love and (book) wars.

Kelsey Rodkey is a burrito lover and banter enthusiast striving to create the stories she lacked as a teenager. Before starting her current job as a communications coordinator, she helped a British film crew make a documentary about a dog grooming expo and was an extra in a music video as a girl who couldn’t stop playing with her hair. She lives near the capital of Pennsylvania, which a lot of people think is Philadelphia, with her significant other and their cat, Cheese. Last Chance Books is her first novel. Follow her at www.kelseyrodkey.com.