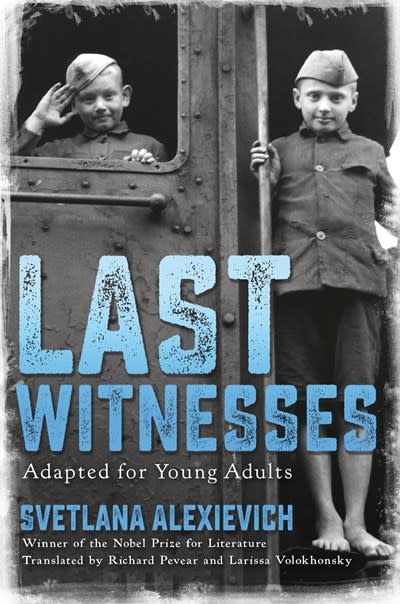 A powerful portrait of the personal consequences of war as seen through the innocent eyes of children, from a Nobel Prize-winning writer.

Nobel Prize-winning writer Svetlana Alexievich delves into the traumatic memories of children who were separated from their parents during World War II—most of them never to be reunited—in this this young adult adaptation of her acclaimed nonfiction “masterpiece” (The Guardian), Last Witnesses: An Oral History of the Children of WWII.

The personal narratives told by those who were children during WWII and survived harrowing experiences, are astounding. So many children were separated from their loved ones in the midst of the terror and chaos. As a result, some grew up in orphanages or were raised by grandparents or extended family; others were taken in and cared for by strangers who risked punishment for such acts. Still others lived on their own or became underage soldiers. Forthright and riveting, these bravely told oral histories of survival reveal the heart-rending details of life during wartime while reminding us that resilience is possible, no matter the circumstances.

Svetlana Alexievich is the winner of the 2015 Nobel Prize in Literature. She has received numerous additional awards for her writing, including the National Book Critics Circle Award and a prize from the Swedish PEN Institute for “courage and dignity as a writer.” She was born in Ukraine and studied journalism at the University of Minsk.