Home » Let's Eat Italy!: Everything You Want to Know About Your Favorite Cuisine 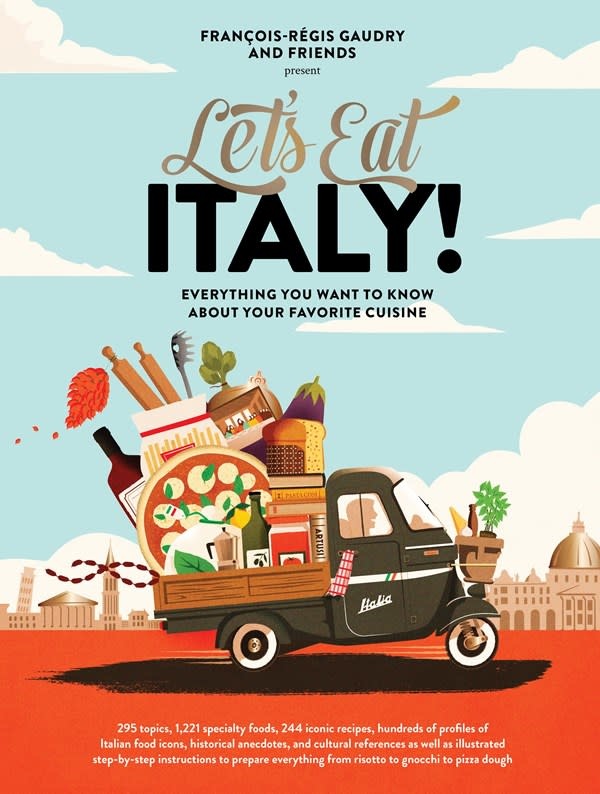 Let's Eat Italy!: Everything You Want to Know About Your Favorite Cuisine

The ultimate book on every aspect of Italian food—inspiring, comprehensive, colorful, extensive, joyful, and downright encyclopedic.

From the same team that created Let’s Eat France! comes this celebration of Italian food in the form of an oversized, obsessively complete, visual feast of a book. With a mix of gastronomy, food science, history, cultural references, legend, lore, charts, graphs, photos, and illustrations, every one of the 400 pages in Let’s Eat Italy! is an alluring and amusing journey into Italian food.

Readers will find recipes for classic Italian dishes spanning all regions, like pappa al pomodoro, Bolognese, risi e bisi, risotto, focaccia, frittata, and so much more—all accompanied by photos and delightfully entertaining information on the origins and modern uses of the foods. There’s an ode to the panettone, the traditional Christmas sweet delight. A dedication to the magic of basil, Italy’s “royal” herb. A love story between pasta and potatoes that examines the many dishes that marry these two starches in delicious harmony. And, of course, pasta information aplenty; it’s featured in guides like that on the ultimate noodle, spaghetti, which includes all the different forms, the top spaghetti artisans in Italy, and the semolina flour mills and farmers. True Italians speak espresso, so readers will delight in the poster-like graphic that depicts 27 different types of espresso drinks. Tips for the kitchen include cooking beans in a chianti bottle—a trick Tuscan nonnas have been using for ages in the dish known as fagioli al fiasco. Learn how contemporary food trends (like the oh-so-hip orange wine, which Italians have been drinking for nearly 8,000 years) trace their roots to Italy. But the influence of Italian food doesn’t stop at the table—an entire spread looks at the Italian Mafia’s favorite dishes as seen in Hollywood, through the lenses of Scorsese, Leone, and Coppola. Let’s Eat Italy! is a splendid exploration of this beloved cuisine, from pizza to gelato, Milan to Sicily, and from the many kitchens of Italy to your own.

François-Régis Gaudry is the author of Let's Eat France! and a food critic and host of the show On va déguster on the French public radio channel Inter France. He is also a food journalist at L'Express and the host of Très très bon on French television channel Paris Première. He lives in Paris. Find him on Instagram @frgaudry.