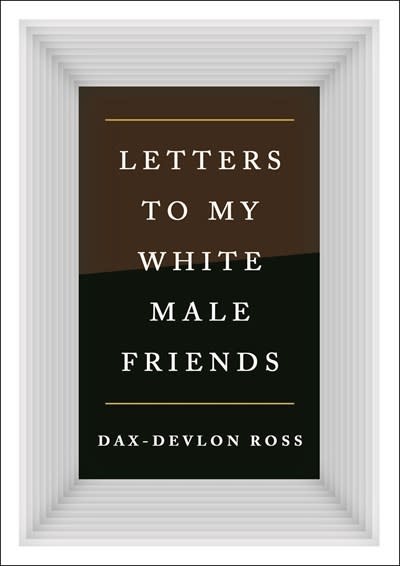 Letters to My White Male Friends

A book aimed at the millions of middle-aged white men who are suddenly awakening to race and racism.

White men are finally realizing that simply not being racist isn’t enough to end racism. These men want deeper insight not only into how racism has harmed Black people, but, for the first time, into how it has harmed them. They are beginning to see that racism warps us all. Letters to My White Male Friends promises to help men who have said they are committed to change and to develop the capacity to see, feel and sustain that commitment so they can help secure racial justice for us all.

Ross helps readers understand what it meant to be America’s first generation raised after the civil rights era. He explains how we were all educated with colorblind narratives and symbols that typically, albeit implicitly, privileged whiteness and denigrated Blackness. He provides the context and color of his own experiences in white schools so that white men can revisit moments in their lives where racism was in the room even when they didn’t see it enter.Ross shows how learning to see the harm that racism did to him, and forgiving himself, gave him the empathy to see the harm it does to white people as well.

Ultimately, Ross offers white men direction so that they can take just action in their workplace, community, family, and, most importantly, in themselves, especially in the future when race is no longer in the spotlight.

DAX-DEVLON ROSS has led a career as an educator, non-profit executive, equity consultant, and journalist. After receiving his J.D. from George Washington University, he joined New York City Teaching Fellows. He is the founding Executive Director of After-School All-Stars in New York and New Jersey, and was the winner of the National Association of Black Journalists’ Investigative Reporting Award. Currently he is a fellow at Type Media Center. A Letter to My White Male Friends is his sixth book.