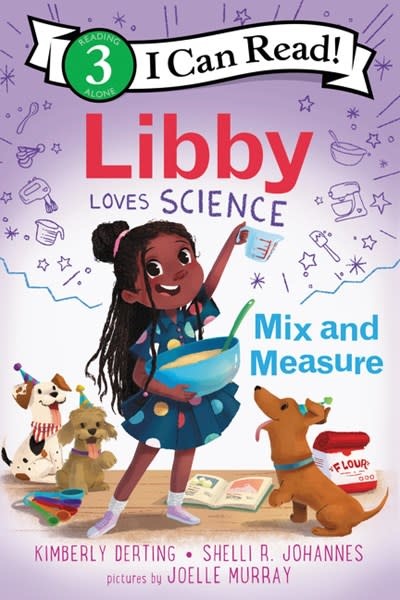 Libby Loves Science: Mix and Measure (I Can Read!, Lvl 3)

Libby loves science! In this STEM-themed Level 3 I Can Read! title, Libby and her friend Rosa learn about mixing and measuring to bake a delicious treat for a puppy party. A great choice for aspiring scientists, emerging readers, and fans of Andrea Beaty’s Ada Twist, Scientist. Includes activities, a glossary, and a cupcake recipe.

Libby loves science—and experimenting! In this Level 3 I Can Read! title, Libby hosts a puppy party for her friends and their dogs. With the help of her friend Rosa and little brother, Libby decorates, stuffs goody bags and bakes delicious cupcakes. But when they realize they’ve forgotten an important ingredient, they use science to solve the problem—just in the nick of time.The Loves Science books introduce readers to girls who love science, as well as to basic concepts of science, technology, engineering, and math. This Level 3 I Can Read! focuses on basic chemistry and friendship. A great pick for newly independent readers and an ideal companion to Cece Loves Science: Push and Pull.