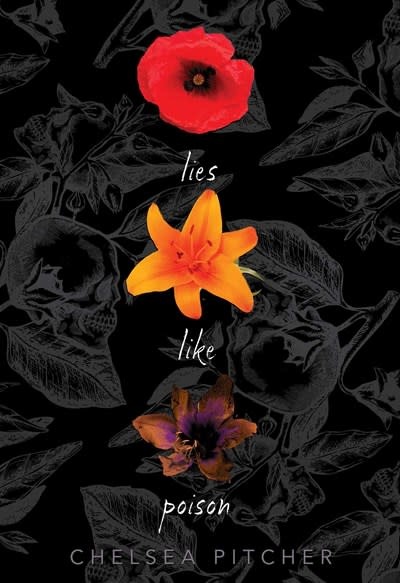 Riverdale meets Kara Thomas’s The Cheerleaders in this electrifying, twisted thriller about estranged friends who reunite when someone commits the murder they’d planned—but didn’t go through with—and leaves one of their own to take the fall.

Poppy, Lily, and Belladonna would do anything to protect their best friend, Raven. So when they discovered he was suffering abuse at the hands of his stepmother, they came up with a lethal plan: petals of poppy, belladonna, and lily in her evening tea so she’d never be able to hurt Raven again. But someone got cold feet, the plot faded to a secret of the past, and the group fell apart.

Three years later, on the eve of Raven’s seventeenth birthday, his stepmother turns up dead. But it’s only belladonna found in her tea, and it’s only Belladonna who’s carted off to jail. Desperate for help, Belle reaches out to her estranged friends to prove her innocence. They answer the call, but no one is prepared for what comes next.

Now, everyone has something to lose and something equally dangerous to hide. And when the tangled web of secrets and betrayal is finally unwound, what lies at its heart will change the group forever.

Chelsea Pitcher is a karaoke-singing, ocean-worshipping Oregonian with a penchant for twisty mysteries. She began gobbling up stories as soon as she could read, and especially enjoys delving into the darker places to see if she can draw out some light. Chelsea is the author of The S-Word, This Lie Will Kill You, The Last Changeling, The Last Faerie Queen, and Lies Like Poison. You can visit her at ChelseaPitcher.com and follow her on Twitter at @Chelsea_Pitcher.