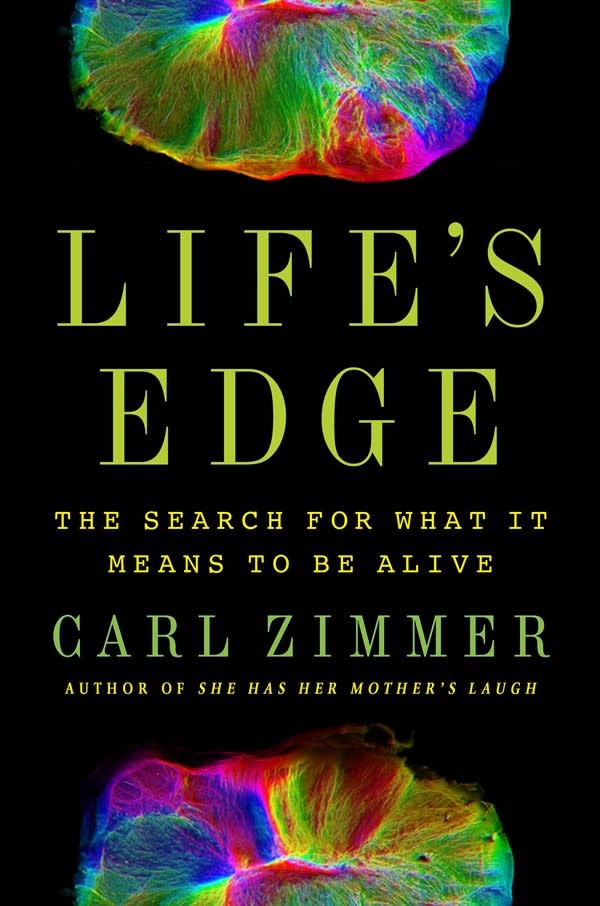 We all assume we know what life is, but from zygotes and vegetables to aliens and androids, scientists can’t actually agree on what it means to be alive. After centuries of confusion, that may be about to change.

Carl Zimmer investigates one of the biggest questions of all: What is life? It seems obvious, but are apples alive or is it only their trees? What if we find aliens and can’t tell if they are alive or dead? These are not just philosophical questions—the debate in the US rages over the legal status of the life of a human zygote. When you are brain dead, are you really dead, or is that just a convenient description for the organ transplant surgeons? What life is matters to us emotionally, legally, and personally pretty much every day. But what is it exactly? Life’s Edge is an utterly fascinating investigation that no one but one of the most celebrated science writers of our generation could craft.

Zimmer journeys through the strange experiments that have attempted to re-create life. Literally hundreds of definitions of what that should look like now exist, but none has yet emerged as an obvious winner. Lists of what living things have in common do not add up to a theory of life. It’s never clear why some items on the list are essential and others not. Viroids, for example, behave like living things, and yet—according to many definitions—are not life. Computer scientists are building programs that grow on digital food, reproduce, and even evolve, but they’re not flesh and blood. Will we ever say they are alive?

From Alabama to Scotland, 18th-century Germany to the Santa Fe Institute in New Mexico, Zimmer revels in astounding examples of life at its most bizarre, boa constrictors that can double and triple the size of their organs, slime molds that can navigate mazes, maple trees that talk to one another. He tries his own hand at evolving life in a test tube with unnerving results. Charting the obsession with Dr. Frankenstein’s monster and how Coleridge came to believe the whole universe was alive, Zimmer leads us all the way into the labs and minds of researchers working on engineering life from the ground up and crossing a line previously accorded only to God.

Carl Zimmer writes the Matter column for The New York Times and has frequently contributed to The Atlantic, National Geographic, Time, and Scientific American. He has won the American Association for the Advancement of Science’s Science Journalism Award three times, among a host of other awards and fellowships. He teaches science writing at Yale, has been a guest on NPR’s RadioLab, Science Friday, and Fresh Air, and maintains an international speaking schedule. He is the author of thirteen books about science, including She Has Her Mother’s Laugh.