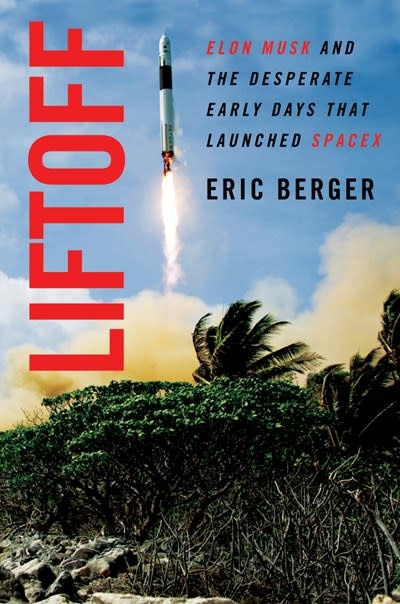 The dramatic inside story of the first four historic flights that launched SpaceX—and Elon Musk—from a shaky startup into the world's leading edge rocket company.

In 2006, SpaceX—a brand-new venture with fewer than 200 employees—rolled its first, single-engine rocket onto a launch pad at Kwajalein Atoll. After a groundbreaking launch from the middle of the Pacific Ocean, the Falcon 1 rocket designed by Elon Musk’s engineers rose in the air for approximately thirty seconds. Then, its engine flamed out, and the rocket crashed back into the ocean. In 2007, SpaceX undertook a second launch. This time, the rocket rose far into space, but just before reaching orbit it spun out of control. Confident of success in 2008, Musk and his team launched their third rocket with several paying customers. The first stage executed perfectly, but instead of falling away, it thudded into the second stage. Another failure. Elon Musk had only budgeted for three attempts when he founded SpaceX.Out of money and with a single Falcon 1 rocket left in its factory, SpaceX decided to try one last, dramatic launch. Over eight weeks, engineers worked furiously to prepare this final rocket. The fate of Musk’s venture mirrored the trajectory of this slender, single-engine rocket aimed toward the skies. If it crashed and burned, so would SpaceX. In September 2008, SpaceX’s last chance for success lifted off . . . and accelerated like a dream, soaring into orbit flawlessly.That success would launch a miraculous decade for the company, in which SpaceX grew from building a single-engine rocket to one with a staggering 27 engines; created two different spacecraft, and mastered reusable-rocket descents using mobile drone ships on the open seas. It marked a level of production and achievement that has not been seen since the space race of the 1960s.But these achievements would not have been possible without SpaceX’s first four flight tests. Drawing on unparalleled access and exclusive interviews with dozens of former and current employees—engineers, designers, mechanics, and executives, including Elon Musk—Eric Berger tells the complete story of this foundational generation that transformed SpaceX into the world’s leading space company.Liftoff includes more than a dozen photographs.

Eric Berger is a reporter and editor based in Houston. After a long career at the Houston Chronicle, he joined Ars Technica in 2015 as the site’s senior space editor, covering SpaceX, NASA, and everything beyond. He was a Pulitzer Prize finalist for his coverage of Hurricane Ike in 2008.