Home » Light for the World to See: A Thousand Words on Race & Hope 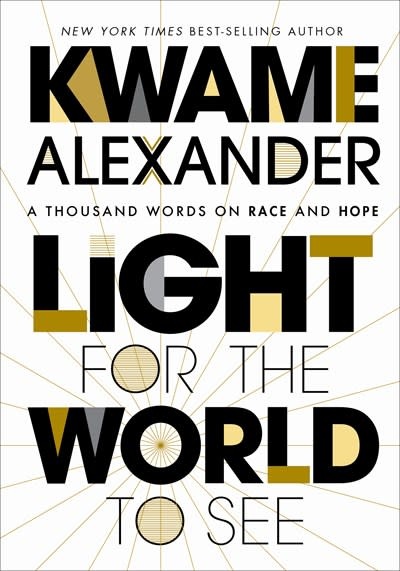 Light for the World to See: A Thousand Words on Race & Hope

A collection of three powerful poems that take on racism and Black resistance in America by New York Times best-selling author Kwame Alexander. Includes an introduction by the author.

Kwame Alexander is a poet, educator, and the New York Times Bestselling author of more than 35 books, including Rebound, the follow-up to his, Newbery medal-winning middle grade novel, The Crossover. Some of his other works include Booked, which was longlisted for the National Book Award, The Playbook: 52 Rules to Help You Aim, Shoot, and Score in this Game of Life, Swing, and the picture books, Out of Wonder and The Undefeated, which was longlisted for the National Book Award, and won the Caldecott Medal, a Newbery Honor, and the Coretta Scott King Illustrator Award.A regular contributor to NPR's Morning Edition, Kwame is the recipient of numerous awards, including The Coretta Scott King Author Honor, The NCTE/Charlotte Huck Honor, Three NAACP Image Award Nominations, and the 2017 Inaugural Pat Conroy Legacy Award. He believes that poetry can change the world, and he uses it to inspire and empower young people around the world through The Write Thing, his K-12 Writing Workshop. Kwame is the founder of Versify, an imprint of Houghton Mifflin Harcourt.www.kwamealexander.com