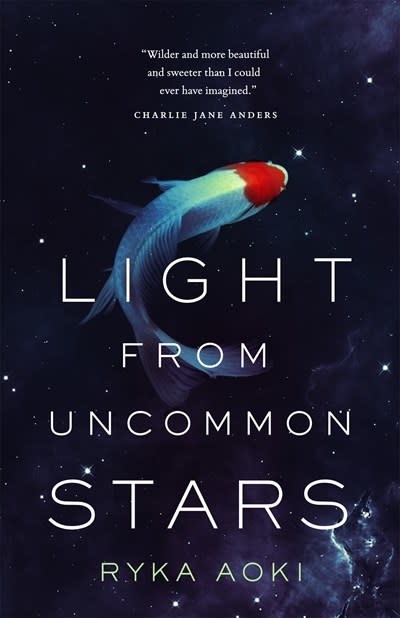 Light From Uncommon Stars: A novel

This lyrical, delightful, queer SF novel is Good Omens with a Faustian bargain.

Shizuka Satomi is a brilliant, cursed violinist who must win her soul back from damnation. To do this, she must take seven prodigies as students, then entice each to trade their soul for fame. She has already delivered six.

However, rather than the usual pampered genius, the seventh, Katrina Nguyen, is a young transgender runaway with a wild talent, who is fleeing an abusive home.

Meanwhile, Lan Tran, a starship captain, has crossed the galaxy with her family to make a new life running a local donut shop. But though she saved them from a galactic war, nothing can stop the end of existence itself.

Faustian bargain meets space opera in this genre-bending novel of three vastly different women. Bombarded by catastrophe, misunderstanding, and fate, each has come to San Gabriel Valley, just outside of Los Angeles, to escape their fates, find their voices, and save the universe.

RYKA AOKI’s first novel, He Mele a Hilo, was published by Topside Press in 2014. She is a two-time Lambda Literary Award finalist for her collections Seasonal Velocities, and Why Dust Shall Never Settle Upon This Soul. Ryka’s work has appeared or been recognized in publications including Vogue, Elle, Bustle, Autostraddle, PopSugar, and Buzzfeed, as well as the Smithsonian Asian Pacific American Center. Ryka has been honored by the California State Senate for “extraordinary commitment to the visibility and well-being of Transgender people.” She has an MFA in creative writing from Cornell University, and is cur­rently a professor of English at Santa Monica College.

You can find Ryka online at www.rykaryka.com