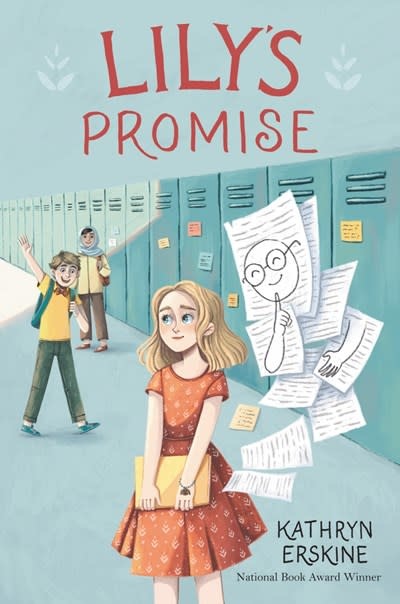 Shy, eleven-year-old Lily promised her dad before he passed away that she would try speaking up five times. But now “Strive for Five” feels impossible, especially as she enters public school for the first time after being homeschooled. Fortunately, she meets curling-obsessed Hobart and quiet Dunya as well as a few other friends at the beginning of sixth grade. It is their kindness that gives Lily hope that life without her dad might just be bearable.However, when Lily and her new friends are bullied by Ryan and his group of mean girls and rude boys, she discovers that staying silent is no longer an option. With memorable characters and friendships that withstand middle grade strife—accompanied by the insightful, often irreverent, commentary from Libro, the book itself—we see Lily realize that she must use the tools her dad gave her to not only fulfill her final promise but also help the whole school come together.

Kathryn Erskine grew up in the Netherlands, Israel, South Africa, Scotland, the United States, and Canada. Her debut novel, Quaking, was named a YALSA Top 10 Quick Pick for Reluctant Young Adult Readers, and her second novel, Mockingbird, won the National Book Award for Young People’s Literature. Some of her other books include The Absolute Value of Mike, a Junior Library Guild selection, Seeing Red, a Jane Addams Peace Association Honor Book for Older Readers, and Mama Africa, a Coretta Scott King John Steptoe Award winner. Kathryn is both an attorney and a pharmacy technician but prefers writing for young people, either on the road or from her home near the Blue Ridge Mountains in Virginia. Visit her website at kathrynerskine.com.