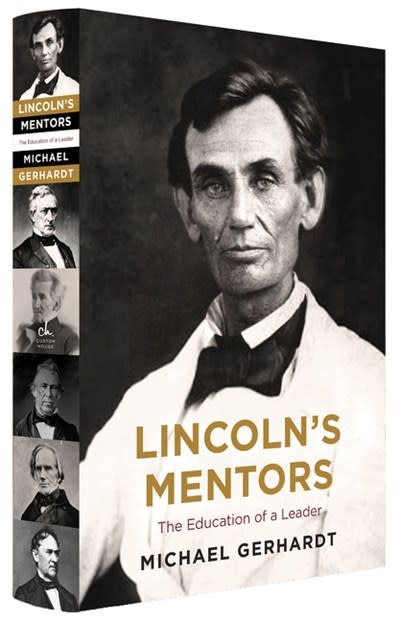 A novel and brilliant look at how Abraham Lincoln mastered the art of leadership: acclaimed historian Michael J. Gerhardt, who appeared during the impeachment proceedings of President Trump, reveals how a group of five men mentored an obscure lawyer with no executive experience to become American’s greatest leader.

In 1849, when Abraham Lincoln returned to Springfield, Illinois, after two seemingly uninspiring years in the U.S. House of Representatives, his political career appeared all but finished. He attempted to revive his law practice but was dismissed from the biggest case of his career six years later. As Lincoln’s spirits dimmed, his Democratic rival, Stephen Douglas, an advocate for slavery, became a senator and rising star. Distraught, Lincoln’s sense of failure was so great that friends worried about his sanity. Yet within a decade, Lincoln would reenter politics, become a leader of the Republican Party, win the 1860 presidential election, and keep America together during its most perilous period. What accounted for the turnaround? As Michael Gerhardt reveals, Lincoln’s reemergence followed the same path he had followed before, in which he read voraciously and studied the successes and failures, life stories, oratory, and political maneuvering of a surprisingly diverse handful of men, some of whom he had never met but some he knew intimately—Henry Clay, Andrew Jackson, Zachary Taylor, John Todd Stuart, and Orville Browning. From both their experiences and his, Lincoln learned valuable lessons on leadership, mastering party politics, campaigning, conventions, understanding and using executive power, managing a cabinet, speechwriting and oratory, and—what would become his most enduring legacy—developing policies and rhetoric to match a constitutional vision that spoke to the monumental challenges of his time. Without these mentors, Abraham Lincoln would likely have remained a small-town lawyer—and without Lincoln, the United States as we know it may not have survived. This book tells the unique story of how Lincoln learned how to emerge from obscurity and to lead.

Michael J. Gerhardt is the Burton Craig Distinguished Professor of Jurisprudence at the University of North Carolina at Chapel Hill. In 2019, he was one of four constitutional scholars called by the House Judiciary Committee during President Trump’s impeachment proceedings. He has testified more than twenty times before Congress, and twice served as CNN’s impeachment expert. His op-eds have appeared in the New York Times and Washington Post. He lives in Chapel Hill, North Carolina.