Home » Linty: A Pocketful of Adventure 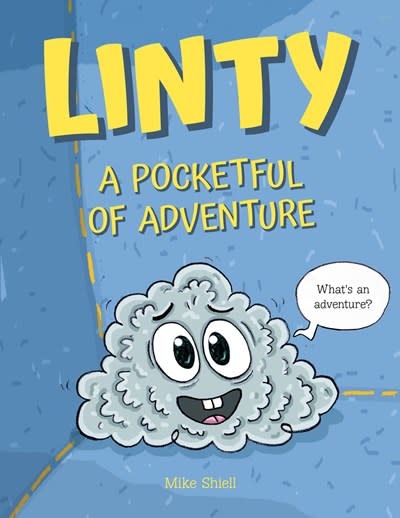 Linty: A Pocketful of Adventure

Silliness abounds in this offbeat early graphic novel with loads of heart.In the pocket of a faded pair of hand-me-down jeans, a tiny ball of lint lives alone. Linty's days are all much the same: Some cardio. Sightseeing (“So blue!”). Solo Marco Polo. Until one day, a boy starts wearing the jeans and everything changes. Before long, Linty has a parade of visitors: an acorn, a coin, pizza crust. Soon, the pocket is packed with new friends, and Linty is having a blast! But, uh-oh . . . Wash Day! Is Linty's world about to be turned upside down, again?An in-jean-ious idea. Kids will never think of their pant pockets the same way again!

Making his author-illustrator debut, Mike Shiell elevates the everyday to hilarious drama in this offbeat graphic novel for early readers.In the front pocket of a faded pair of hand-me-down jeans, a tiny ball of lint lives alone. The days are pretty much the same for Linty: Some cardio. Sightseeing (“So blue!”). Solo Marco Polo. Until one day, everything changes. A boy, who has finally grown into the jeans, has put them on. All Linty knows is that he's suddenly shaking and bouncing like crazy. And then visitors start arriving. There's an acorn, a coin, pizza crust. Linty is a bit overwhelmed at first. Soon, though, the pocket is packed, and he's learning all kinds of fun new things to do (imagine, Solo Marco Polo with friends!). But then, just as suddenly . . . Wash Day arrives. Is Linty's world about to be turned upside down, again?Cartoonist, animator and illustrator Mike Shiell makes his author-illustrator debut with this high-energy and very funny graphic novel for early readers. Silly and engaging, with loads of heart, it's the perfect book to place in the hands of any reluctant or emerging reader. The relatable emotions of the lovable main character as portrayed in the story and the expressive illustrations support social-emotional learning with themes of making friends, embracing what life throws at you, and finding the courage to try new things. And the busy, brightly colored pages full of hysterical dialogue, asides and antics (ever wonder what happens to lint when it goes through the washer and dryer?) enhance visual literacy.

Mike Shiell is a cartoonist, animator and illustrator. He is the creator of the animated short films, Melon Shorts and the Wandering Melon web comics series, as well as the illustrator of the Gross Science book series (written by Edward Kay). As a longtime animation director with Nelvana, Mike also directed a number of children's TV shows, such as the Emmy Award-winning The Backyardigans and Mike the Knight. He lives in Georgetown, Ontario.