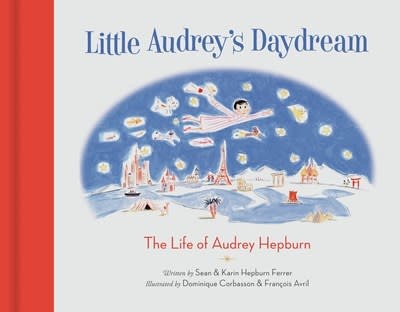 Little Audrey's Dream introduces kids to the life of one of the most beloved actresses. It covers her childhood, living in Europe during WWII and the German Occupation. After the war, she enrolls in a premier ballet school, and from there becomes a performer, acting, singing and dancing. She starts acting in small productions of plays and musicals and is cast in a film. From there she becomes a star. She doesn't let the fame go to her head. She is more focused on where to raise a family because of her great love for children. While raising her own kids, she starts getting involved in the lives of children in need all over the world. This interest became her central goal for the rest of her life. This empathy towards children circles back to her own childhood struggles during WWI. Her strong spirit and determination throughout her life will inspire readers of all ages.

Sean Hepburn Ferrer was born in Bürgenstock, Lucerne, Switzerland on July 17, 1960 to Audrey Kathleen Hepburn-Ferrer and Melchor Gaston Ferrer. For 40 years, Sean has worked in every aspect of the Entertainment industry and a series of nonprofits dedicated to continuing his mother's humanitarian legacy as a UNICEF ambassador. He is the author of the New York Times best seller Audrey Hepburn, An Elegant Spirit. Sean, together with his wife Karin with whom he not only shares his life but also his day to day business, distilled Audrey's rich life into this essential story in Little Audrey's Daydream. They split their time between Switzerland, Spain, and Florence, Italy, with their respective five children.