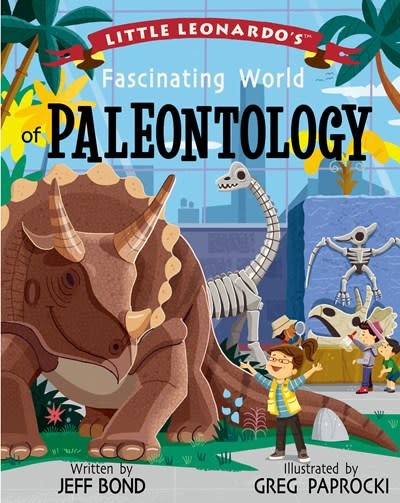 Companion book to the Little Leonardo Fascinating World of series all about paleontologists and dinosaurs with hands-on activities for young readers.

Learn fun facts about dinosaurs and the scientists who study them, called paleontologists, with simple hands-on activities for young readers. Did you know that a dinosaur bone is a fossil? Or that the same bones that form your ear form the jaw bones in a Tyrannosaurus Rex? The activities, designed to engage both the readers’ hands and minds, include fossilizing a sponge, making origami dinosaur tracks, preserving toy bugs in gummy amber, and more. Little Leonardo’s Fascinating World of Paleontology acts as a hybrid of Little Leonardo’s Fascinating World of books and Little Leonardo’s MakerLab books, which are both part of the Little Leonardo series from Gibbs Smith.

Jeff Bond has been working with dinosaurs since 1992. He currently serves as Education Director for the George S. Eccles Dinosaur Park in Ogden, Utah. In his spare time, he designs origami, plays piano, collects model mecha, writes science fiction, and enjoys adventures with his beautiful wife and two rambunctious daughters.

Greg Paprocki works full-time as an illustrator and book designer. He has illustrated several Curious George books, as well as previous books in the Little Leonardo series, the BabyLit alphabet book series, the new Count and Find primer series, and The Big Book of Superheroes for Gibbs Smith. He lives in Lincoln, Nebraska.

Greg Paprocki is an award-winning lifestyle, commercial, and portrait animal photographer. He is active in animal rescue and advocacy for pit bull-type dogs. Greg is the photographer behind Peanut Butter Dogs, a rollicking portrait collection of more than 140 dogs enjoying peanut butter, and Pit Bull Heroes: 49 Underdogs with Resilience & Heart, which spotlights forty-nine underdogs who beat the odds and became heroes in their families, neighborhoods, and communities. His work has been featured in Huffington Post, Today, Daily Mail, Elle, People, and other media outlets throughout the world. Greg lives near Cleveland, Ohio, with his wife, Kristen, daughter, Evie, and two rescue dogs, Leo and Kensie.