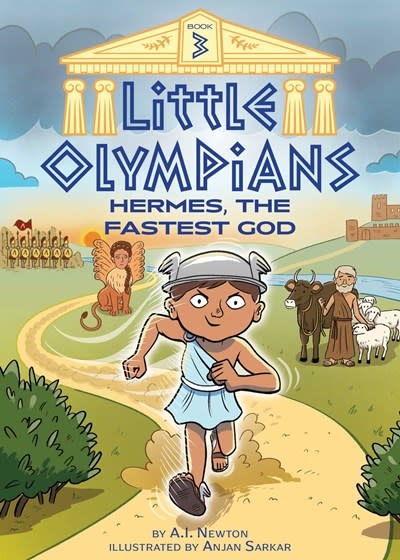 Little gods, big personalities! This series follows little versions of the Greek gods who are at a camp to learn how to control their powers and use them properly--as well as learn how to get along with one another.

The Little Olympians are out on a field trip to an actual Greek town! They're enjoying their time in the city and seeing all the human things there, but are having trouble fitting in without getting noticed. However, the trip changes from fun and games into a rescue mission when Hermes, Zeus, and Athena overhear a plot for a surprise attack on the town at sundown. Athena and Zeus stay to keep watch on the town, while Hermes must run a marathon all the way to Athens and back to get their help. Will he be able to brave being on his own for the first time and all the dangers of the road, such as a raging river, a storm, and a Sphinx, to save the town?